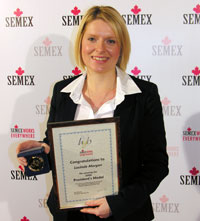 A runner-up in last year’s final, Lucinda was brought up on the family farm in south Wales and has taken a keen interest in showing calves at local club shows from an early age. She is also a member of the Devon Holstein Young Breeders and holds a national diploma in agriculture from Golden Grove College.

Lucinda said: “This award is widely recognised as an important means of commending the youth of the industry for all their hard work and commitment.”

Along with the award, Lucinda will also receive a trip to the Royal Winter Fair in Toronto later this year.