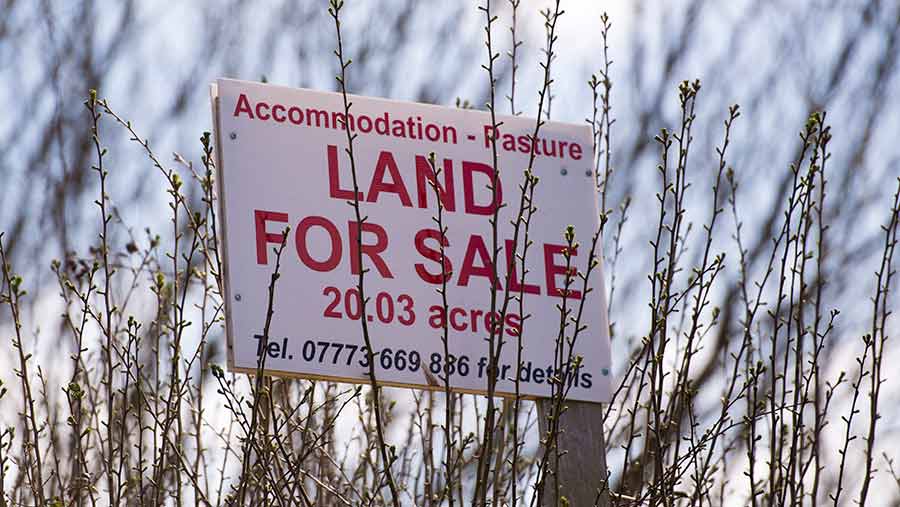 The global financial crisis began 10 years ago this month but data seen by Farmers Weekly shows that despite a volatile environment, supply has remained relatively flat while average values have more than doubled.

Savills’ research, however, will ring alarm bells for a number of “vulnerable” farm businesses who are currently being propped up by direct payments and low interest rates.

It highlights a worrying rise in the number of debt-related sales of UK farms which has risen from 5% in 2007 to nearly 20% last year.

Supply has not reached 2008 levels since.

“Wheat prices and sentiment drove prices up rather than the financial crisis, and the fall (since 2014) has been attributed to the lowering of wheat values over the past few years.”

Another trend identified in the research is the impact on buyer types.

Rollover cash dried up almost instantly when the crisis began to bite as housebuilders downed tools, and the absence of big city bonuses contracted the number of lifestyle buyers.

As the economy has recovered, those buyers have returned, generally replacing farmer buyers in the market.

“That’s one of the reasons I think land values won’t crash, even if we get a hard Brexit, because as the economy picks up rollover money will underline farmland values,” Mr Bailey says.

Debt as a driver of sales

Debt was only sighted as a driver in a handful of sales in 2007 when the crisis began. But that number has increased to about 20% in 2016.

That figure is in line with the long-term average, Mr Bailey says, but what makes the 20% figure an issue is that it comes at a time when interest rates are at less than 0.5%.

“We’ve had less profitable years in farming recently so the cheaper money has kept some businesses afloat,” Mr Bailey says.

“If you look back at 1991 when interest rates were at 15%, debt was a reason for selling in 26% of cases. So when base rates are at less than 0.5% and we are still getting debt-related sales of nearly 20%, that is actually quite worrying.”

The long-term impact on borrowing

One significant change that farmers borrowing money to buy land will have noticed is more checks and balances on lending applications.

Industry debt is at its highest level since 2014 at £19bn, so lenders are lending.

But a decision on applications now hinges as much on a borrower’s ability to service a loan as the value of the asset they are buying.

Andrew Fallows, head of rural agency at Carter Jonas, says some farms may feel “picked on” because they are being asked to provide far more detail about their financial position than before.

“It’s a tightening up across the sector. We are seeing lenders far more focused on servicing of debt rather than merely the asset they’re lending against,” he says.

“That’s been clear in the past 10 years since the global financial crisis.”

For Woolley & Wallis partner Richard Nocton, one of the lasting effects of the crunch is a wider and more businesslike audience.

He says: “Farmland still remains supported by taxation legislation, principally inheritance and capital gains rollover relief. These two rafts of legislation are the mainstays of high agricultural land prices and the price of land will remain strong as long as theses remain in situ.”

UK land since the credit crunch