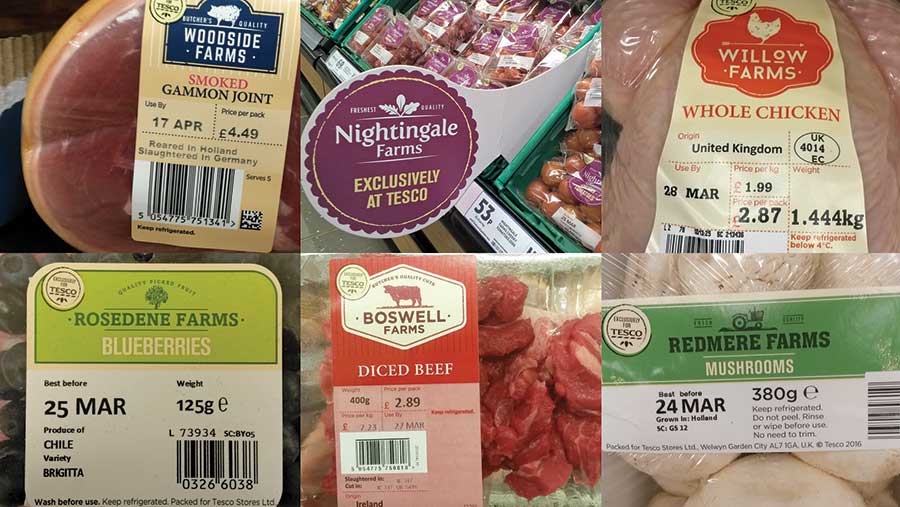 Tesco is facing heavy criticism for its new “farms” range, which uses British-sounding farm names to sell fresh produce from abroad as well as the UK.

The seven new brands have been named after farms that either don’t exist, or which Tesco said had “historically been operating farms”.

“Willow Farms” is the only new brand to offer 100% British produce (chicken), while five brands offer a mix of British and imported and one is exclusively imported. White potatoes will be 100% British.

See also: Hundreds of farmers arrive in London for day of action

Products from British suppliers clearly display the Union flag, but the same farm name is being used to sell produce from several countries – although the country of origin is marked on packs.

The farming industry has reacted angrily to the branding, accusing the retailer of misleading consumers and riding on the coattails of the trust UK farmers have built.

The NFU’s head of food and farming, Phil Bicknell, said: “The names of these farms don’t have any link to where the product has been sourced – something that has the potential to confuse or even mislead customers.”

“It is clear that Tesco has identified that customers have a positive affinity with farmers and wants to capitalise on this. Although we are pleased this is giving a positive view of our industry, we want this image to be used with integrity.”

Zoe Davies, chief executive of the National Pig Association, added: “It’s misleading quite frankly, we’re not impressed. They’ve labelled the packs with country of origin but all under the same brand name.”

Shoppers that Farmers Weekly spoke to said the new labels made them think the products were British, English, or even local. One shopper said the packaging was “deceptive” and asked “how can Rosedene Farm be in several different countries?”.

Rich Ford, at retail design agency Sherlock Studio, said his company’s forensic linguists had found the brand names “littered with references to the natural environment and rural, historic, bygone features of England”, which arguably created a “sense of reassurance among shoppers.”

See also: Your guide to the Groceries Code Adjudicator

Farmers reacted angrily to the new branding. Kate Morgan, a Yorkshire pig farmer, called it “a joke” and said it was deceiving the consumer.

Peter Vickerton, a sheep farmer, also from Yorkshire, said it was “a case of marketing over substance”, while Jane, Cooper, a sheep farmer on Orkney, asked: “What reality are they trying to hide behind a fictitious farm?”

However, Jack Ward, chief executive of the British Growers Association, said Tesco was simply reacting to the pressure from discounters and other retailers who had already developed farm name brands, such as Morrisons, Aldi, Lidl and Waitrose.

A Tesco spokesperson said: “We’ve named the brands after farms to represent the quality specifications that go into every product across the range.

“All of our packaging clearly displays the country of origin on the front of pack to help customers make an informed decision on what they wish to buy.

“All of our British produce is clearly labelled as such, and greater prominence has been given to the Union Jack on pack.”