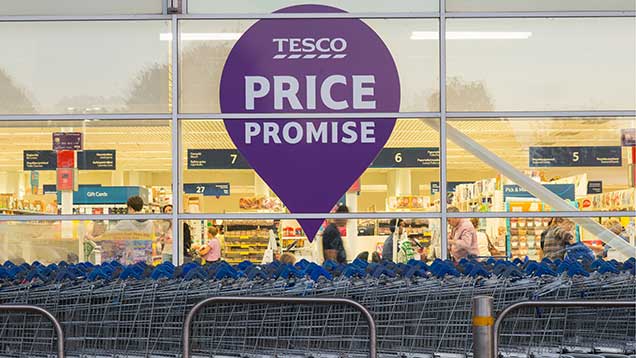 Tesco has launched a “comprehensive and thorough” review of the way it buys milk direct from farmers.

Britain’s biggest retailer has written to the 650 producers in the Tesco Sustainable Dairy Group (TSDG), saying major industry changes have forced a rethink.

These farmers, who cover the supermarket’s liquid milk, cream and mature cheddar needs, are currently paid a price linked to the group’s average cost of production, set at 30.43p/litre from May.

Tesco’s price is far higher than the average UK milk price of 24.06p/litre, which makes the direct supply scheme very expensive for the retailer to run.

“It is vital that throughout this process Tesco works to further develop transparency, fairness and sustainability within the model.”
Rob Harrison

In the note, Tesco commercial director for fresh food and commodities Matt Simister said supply chain stakeholders, industry bodies and farmers would be involved in the review.

He said the pricing mechanism would still be transparent and farmers who drove performance, efficiency and standards would be paid a fair price. The review would also look at reducing transaction costs, add more value and manage risk better.

“We will continue to use an independent cost tracker and work in partnership with you to deliver the best quality milk for our customers and the highest animal welfare standards,” Mr Simister said.

The raging retail price war, driven by the rise of discount stores, has led to months of speculation over how long Tesco would continue its costly supply scheme.

In 2014, it slashed the on-shelf price of milk to £1 for four pints, fuelling farmer outrage over devaluation of their produce.

In the May, the supermarket reported a £6.4bn loss – the worst annual result in its 96-year history.

Tesco’s letter explained the review was due to significant change in the industry.

It pointed to the removal of EU milk quotas, world market volatility, the growing importance of farmer-owned co-ops, and shrinking producer and processor numbers.

NFU dairy board chairman Rob Harrison said the decision would cause worry and concern to those affected.

He said Tesco should expand its current support to other dairy producers, while farmers should fully engage with the review.

“It is vital that throughout this process Tesco works to further develop transparency, fairness and sustainability within the model,” Mr Harrison said.

The retailer buys milk through processors Muller Wiseman, Arla and Parkham Farms. Arla farmers are paid at the co-op’s standard rate, with the Tesco premium used for the benefit of all members.