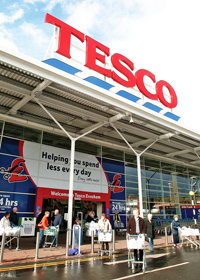 Tesco Ireland has slashed the price of over 12,000 goods – including many food products – in 11 of its stores close to the border with Northern Ireland, in an attempt to stem the flow of shoppers into the Province.

Increasing numbers of Irish consumers have been crossing the border in recent months, looking to take advantage of the fact that the 20% devaluation of sterling means they can get more for their cash by shopping in pounds.

In response, Tesco closed all its border stores last weekend, refurbished them, then reopened them, with price reductions averaging 22%.

Toney Keohane, Tesco Ireland chief executive, said the changes were a fight-back to protect jobs and the economy in the region. “From now on, this is as far north as anyone needs to go to get great value.”

But Irish Farmers Association president Padraig Walsh accused the supermarket of using his members as “cannon fodder”. “Tesco’s tactics will squeeze producers and processors even harder at a time when the Irish food sector is under huge pressure and farmers are already forced to produce at below the cost of production.”

Food and Drink Industry Ireland, representing processors and exporters, said the move was a “wake-up call for government”. “They must address our unsustainable cost base, which includes the second highest electricity prices in Europe, waste disposal costs twice the British level, and a VAT differential of 6.5%.”