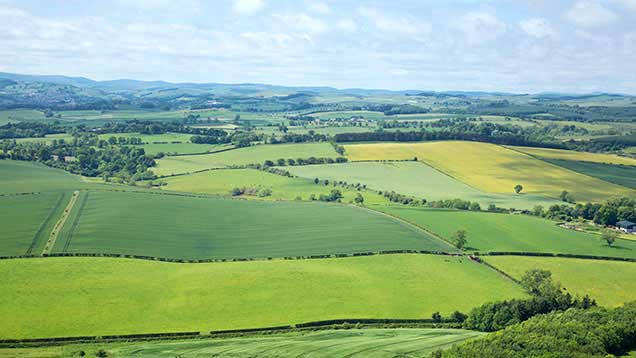 The sale of three large farms in England, Scotland and Wales is bringing more than 2,500 acres to the market.

A rare opportunity to purchase an 880-acre mixed farm in the Scottish Borders comes with the sale of Hassendean, near Denholm.

The family has farmed it for nearly three decades, running 300 head of Angus cross Limousin cattle and 700 Greyface ewes.

While livestock is grazed across 295 acres of pasture, wheat and barley are predominantly grown on the 585 acres of Grade 3 and 4 arable land with winter wheat yields in excess of 3.5t/acre.

Savills associate director Luke French said: “It’s an immaculate set-up and it has been a number of years since we have seen a mixed farm of this scale and quality on the market.”

About 1,080 acres of farmland is included in the sale of Compton Castle on the Somerset and Dorset border near Sherborne.

The estate has around 262 acres of pasture and 820 acres of arable land. Maperton Farm is the largest agricultural block being lotted with 772 acres of predominantly arable land, a grain store and weighbridge. It also includes a dairy unit that previously supported 150 cows and an extensive range of buildings. The farm has a guide price of £8m.

The largest estate on the Welsh island of Anglesey is being sold for the first time.

The Plas Gwyn Estate, near the village of Pentraeth, includes about 600 acres of grassland and woodland which are split into a number of lots and let under a variety of farm business and Agricultural Holdings Act tenancies.