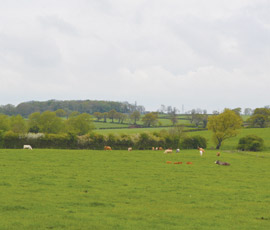 All are let on Agricultural Holdings Act (AHA) tenancies, offering the buyer 50% inheritance tax relief after a qualifying period.

“It’s quite unusual to be launching three let farms at the same time – these farms are under different ownership with different reasons for selling,” said Brown & Co’s Ben Wills.

The largest, with 469 acres of Grade 3 land in a ring-fence, is Lower Lodge Farm at Harlaxton, Lincolnshire. As well as the Grade II-listed six-bedroom farmhouse, there are four farm cottages, along with modern and traditional farm buildings.

There is grain storage for 1,000t and a general-purpose building, alongside several traditional brick buildings.

The free-draining soils are mainly Denchworth and Banbury series and the farm is in a nitrate vulnerable zone (NVZ) with an Entry Level Stewardship agreement.

Part of the holding is subject to a 20% development uplift clause for 20 years, reflecting development potential under the local plan. The tenant holds the sporting rights at Lower Lodge Farm.

Moving to Leicestershire, Manor Farm at South Croxton has 330 acres of land, a farmhouse, buildings and two cottages. Here the AHA rent is £28,000 a year and the guide price is £1.6m.

This mainly arable holding is in a ring-fence with good access to most of the land from a public road. Some of the mainly traditional farm buildings and main courtyard could be converted to alternative uses, while there is potential to extend the four-bedroom farmhouse by taking in three redundant cheesemaking rooms.

The farm is on Grade 3 medium clay loam and much of the land has been drained by the tenant. Manor Farm, South Croxton, is also in an NVZ and the tenant is the first successor to the original tenant.

In East Yorkshire, Brown & Co is also selling Manor Farm, Burton Fleming, a productive Wolds farm with 452 acres, farmhouse and buildings. This is also occupied by a first successor tenant paying a rent of £33,350 a year.