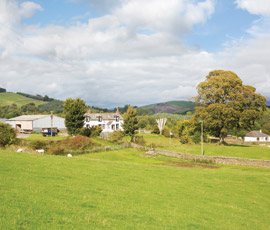 Farms and bare land on the market this week give buyers the choice of northern or southern Scotland.

Lochmailing, near Auldgirth, Dumfries and Galloway, would make an ideal starter unit for a new entrant or farmer’s son or daughter looking to strike out on their own, according to Knight Frank’s James Denne.

The 186-acre unit comes with a good range of modern buildings and currently supports 112 cows and followers and 330 ewes.

All the fields have access to mains water and there is a nine-acre block of woodland. “It’s a really nice unit that has been very well run and maintained,” said Mr Denne.

“The main three- or four-bedroom house is extremely comfortable, but not so large that a buyer who wants to get into farming is spending all their money on a residential property,” he added.

The farm also includes a three-bedroom cottage that could be let for £450/month and planning consent for a 15kW wind turbine.

Knight Frank is looking for offers of more than £1.15m for Lochmailing, which will include single farm payments over all eligible land. (Knight Frank 01578 722 814)

The 116-acre arable and grassland holding is on Grade 3 land and is for sale for offers of more than £1.2m. Its seven-bedroom farmhouse needs modernising.

Some of its mainly traditional stone buildings need repairs, but have equestrian or conversion potential as well as farming use.

“Should prospective purchasers wish to acquire the property, but not directly farm the land, there is good potential for contract farming or leasing of the land,” said agent Aberdeen & Northern.

The land is IACS registered but entitlements are not included in the sale and there is the possibility of adding 200 acres or so of land on an adjacent farm. (Aberdeen & Northern (Estates) 01467 623 800)

A block of 92 acres of productive arable and permanent pasture near Wigtown, also in Dumfries and Galloway, makes up the third offering.

At Catlewigg North is a block of ring-fenced bare land in four fields. It is split between 35 acres of arable and 44 acres of permanent pasture and is graded Class 4.