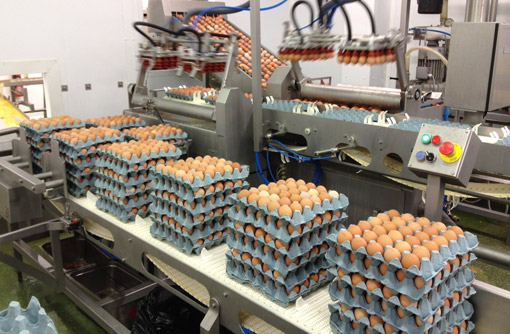 In 2009, with the conventional cage ban approaching, bosses at Pork Farms wanted to secure a supply of liquid eggs, a key ingredient in many of their products.

“We wanted to take the uncertainty out of the market and guarantee a sustainable supply,” said Paul Denney, Pork Farms head of purchasing at the pork manufacturer in Nottingham.

Approaching supply chain consultant EFFP, the company was looking for a collaborative alternative to its existing supply chain and needed egg producers and an egg processor.

“We identified egg producers in Yorkshire with the right mindset and developed a cost of production model with them,” said Paul Rhodes from EFFP.

Marketing co-op EggSell, based near Beverley, East Yorkshire, was a newly formed group of more than 25 egg producers which was already working with EFFP and looking for the chance to work more closely with customers.

“We had worked with EFFP before as they’d helped set up the group and they knew we were looking for a long-term trade relationship,” said Barry Jackson, chief executive of EggSell.

The main benefit for egg producers, according to Mr Jackson, is the stability and longevity of the relationship, which doesn’t exist in traditional supply chains.

“We wanted to be able to plan two or three years in advance.”

EFFP facilitated discussion to align their individual objectives, develop commercial and operational ways of working and start to form a relationship.

The second part of the collaboration was finding a processor that could turn the shell egg that EggSell produced into the liquid egg that was required by Pork Farms.

The important detail was to find a company interested in working collaboratively with the necessary plant and accreditations to meet Pork Farm’s requirements.

A quarter of egg in the UK is used as processed product, so there was no shortage of businesses that could provide this service. However, EFFP identified family business Bumble Hole Foods, in Bromsgrove, Worcestershire, as the perfect partner.

“They had a positive attitude, were well set up, were willing to invest to deliver the requirements and were open to discuss working in a different way from the norm,” said Mr Rhodes.

In addition, Bumble Hole was already working with EggSell on other contracts.

The importance of having a different customer base was what attracted Bumble Hole to the partnership, according to managing director Andrew Hewston.

“We wanted to give farmers more stability with a fixed price based on cost of production. Markets in the past were very limited, but the partnership gives farmers the opportunity to add value to their product and look at the long term, particularly with fluctuations in egg prices.”

Prices went up fourfold this spring after the EU cage ban came in.

In most supply chains, excessive price volatility inherent in any market driven by rapidly changing supply and/or demand is a key challenge, said Mr Rhodes.

EFFP developed the COP model for processing as well as production, which created transparency in the chain and was essential to help facilitate the development of the eventual egg supply contract.

“Building the relationship took months and getting an agreement from all three parties was challenging,” said Mr Rhodes. “We started by creating a sophisticated model and used it as a basis for price negotiations. One of the things we brought to negotiations was managing expectations and needs while getting each party to see the others’ sides.”

“Things like this don’t happen without someone bringing the partnership together. Things don’t always go to plan.”

The three parties had to come to an agreement, which wasn’t the easiest task, said Mr Jackson.

“We’ve all had to make compromises. With three in the network, we had to work really hard to demonstrate the benefits for the other parties, but that may mean you might not get what you want – or all of what you want.”

The initial agreement for part of Pork Farms’ liquid egg requirements was signed in spring 2010, but this was just the start as, to further build the volume, all parties had to prove themselves.

The chain operated successfully and Pork Farms was soon keen to increase the 10,000 litres of liquid egg a week under the agreement.

With all these elements in place, the partnership supplies all Pork Farms’ £3.2m liquid egg requirements – around 25,000 litres a week.

“This three-way relationship is working well and has formed a sound platform for developing other added-value and cost-saving initiatives,” said Mr Rhodes.

Mr Hewston says both farmers and customers see the benefit of the supply chain.

“These relationships work well when everyone can benefit. I hope it will mean consumers asking more questions about the origin of eggs in processed products because, when they go to the supermarket and buy eggs they know where they come from, but they don’t necessarily know if there are British eggs in their quiche or cake.