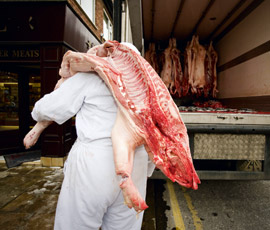 Producers may have a good opportunity to renegotiate their slaughter pig contracts in the likelihood of a 4% drop in UK pig slaughter numbers during the second half of this year.

Some of the main pig processors use the shout price system for a larger proportion of their requirements than others, where the DAPP link remains a more popular alternative.

Slaughter pig contract terms are also becoming more favourable now that there is more competition for reduced pig supplies with a rising number of retailers, processors and caterers looking for UK-sourced pigmeat produced to Red Tractor or Freedom Food standards.

Although the Tesco Sustainable Group initiative to source 15,000 pigs a week has yet to be fully re-launched, other pricing proposals, which include both a cost of production (COP) and a DAPP link, are well worth considering during contract negotiations.

With lower feed costs, heavier pig production is now a more viable option. Some slaughter contracts are making payments for up to 100kg deadweight, but with heavier pigs producers should also negotiate a “Q” price based on a 14mm grade rather than on lower probes in order to avoid over-fat penalties.

With pigs worth more money, shorter payment terms also become more critical and can also help to reduce producers’ exposure to potential bad debts. Payment dates vary between abattoirs, but producers should aim for payments in less than 21 days where possible. Notice periods either way also need to be agreed with a six-month minimum.

With rising transport costs, proximity of the abattoir also affects the net return from pigs. Better killing out percentages are also likely when pigs are slaughtered closer to home.

Although spot prices can, during times of rising prices, exceed contract returns, on balance contracted pig sales can provide a better overall return on an annual basis also avoiding the need to search for outlets for pigs when spot demand eases.

Selling pigs via marketing groups rather than direct can provide bad debt insurance cover, but some producers prefer to build up a personal relationship with their buyers and deal direct.