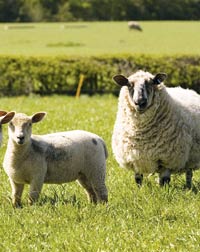 Sheep farmers can be cautiously optimistic that underlying tight supplies could help support sheep prices into next year, according to EBLEX.

It predicted the 5% year-on-year decline in the UK breeding flock revealed by the December census would reduce the current season’s lamb crop by around 4.5%. “As long as we don’t get a big glut of lambs carried over into next year, as we saw in 2007, I’m reasonably optimistic,” senior analyst Mark Topliff said.

Good growing conditions could offset some of the decline in numbers by increasing average slaughter weights this autumn, leaving domestic mutton and lamb production for the second half of 2009 at a similar level to last year, when the breeding flock totalled 14.4m head.

Mr Topliff predicted a further 5% decline in the 2009 breeding flock would reduce next year’s lamb crop by another 5%, with overall lamb and mutton production next year expected to be 3% down on 2009.

“The breeding flock is certainly still contracting and cull ewe slaughterings are high, even slightly higher than last year,” he said. “Over the last four years they’ve been running at 1.06-1.08m, compared with nearer 800,000 in previous years.”

But the UK is not alone in its declining sheep flock and export demand is expected to remain strong, despite the recession, while imports could be subdued. “Ireland and France have both seen some decline in their breeding flocks. New Zealand also saw a big decline last year, but that’s arrested recently as poorer dairy returns have slowed the number of farmers switching out of sheep to dairy.”

The strength of sterling will have a crucial impact on future prospects, but Mr Topliff said the current level (£1: €1.14260) was generally good for UK sheep producers and there was some leeway for a slight strengthening.