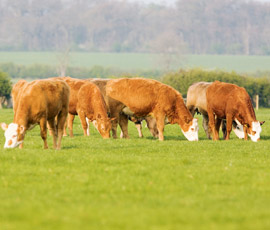 Tight numbers are keeping cattle prices firm, along with the desire of retailers to source as much home-produced beef as possible.

The shortage of cattle has meant a return to the live ring for some buyers who would usually only source cattle on a deadweight basis.

While cattle are taking longer to finish because of some poorer-quality feed fed during the winter, auctioneers and buyers urge producers to market stock as soon as they are ready in order to get the best price.

Emma Coupland of Darlington Farmers’ Auction mart said finished cattle were as dear as they had ever been in last week’s Thursday finished market, with 72 steers averaging 226p/kg liveweight and 89 heifers averaging 235p/kg.

The young bull trade was also keen, but most retailers now impose a 16-month age limit and there was a strong incentive to market within this limit – bulls within the age limit were earning a 15-20p/kg premium, said Ms Coupland.

Farm-assured native breed cattle were in particular demand at Greenslade Taylor Hunt’s Sedgemoor auction on Monday, with Angus and Hereford cattle making up to 20p/kg premium over other native breeds.

While deadweight prices eased slightly in early June, selling cattle may be taking a back seat to other on-farm activities, so processors may be finding it difficult to source adequate supplies to meet their specific retail contracts, reported EBLEX.

Combined with the continued concentration on beef of UK origin by the major retailers, this is likely to result in prime cattle prices edging upwards in the short term, said its weekly report. The rising number of young bulls coming through the system meant the age limit cut-off would receive increasing focus.

Cattle numbers this year were very slightly above last year, but still very tight, with no expectation of a return to plentiful supply, said EBLEX market specialist manager Stephen Howarth. He expected the gap between young bull prices and other clean cattle to close later this year as young bull numbers rebalanced and reduced.

Clean cattle slaughterings in Great Britain in the week ended 8 June were estimated at 14,700 steers, 10,900 young bulls and 6,100 heifers, while cull cow slaughtering was at 8,900 in the same week.

New-season lamb prices dipped again in early markets this week as numbers rose seasonally – medium-weight lambs averaged 219.29p/kg in markets to Tuesday, a drop of 9.67p on a throughput that was 12% higher than last week.