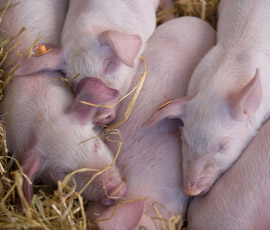 Pig prices have risen again, with tightening supplies boosting the EU Deadweight Average Pig Price to 142.35p/kg in the week to 24 March.

That was 0.83p/kg up on the week, 3p higher than the low reached last month, and 5.8p above the same time last year. The average weight of pigs in the sample fell slightly to 78.86kg, with the average P2 probe measurement also marginally down at 10.7mm.

“The recovery in the finished pig price has led to some upward movement in the weaner market, despite relatively high feed prices,” said a report by AHDB Meat Services. Average values for 30kg weaners had increased by 38p in the two weeks to 31 March, to £45.95 a head.

Imports of fresh and frozen pork in January were 13% lower than last year, at 25,200t – the lowest level for nearly two years. Bacon imports dropped below 20,000t for the first time since August 2009, to 19,800t, while processed imports increased by more than 50%.