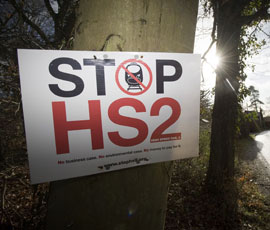 The controversial high-speed rail link (HS2) between London and Birmingham was approved by the government earlier this year. These are some of the most common questions being asked by farmers and landowners along the route.

In all likelihood yes – the coalition remains committed and it has cross-party support. But it is not completely in the bag yet. A number of judicial reviews are pending that could delay the scheme and there will be other opportunities for legal challenges. If Labour wins the next election it may be less enthusiastic about bankrolling such a controversial project.

Officially, the safeguarding process, which officially identifies the land required for the railway and effectively blocks any planning applications that could prejudice the scheme, is due to start this autumn. The parliamentary legislation enabling the scheme is due to be passed by 2015, compulsory purchase orders issued in 2015, construction to start in 2017 and the line to open in 2026. However, the overall timetable may drift by a year.

3. What compensation am I entitled to if the scheme affects my property?

If all or some of your farm is needed for HS2, the compensation will cover the value of the land and buildings, severance (increased costs of working the divided farm), injurious affection (the diminution in the value of remaining land), disturbance (actual losses incurred as a result of land being taken during construction) and a number of additional elements including professional fees and other directly attributable and quantifiable losses. Land will generally be acquired via a Compulsory Purchase Order, although it may be possible to negotiate directly with HS2 prior to a CPO being issued once the route has been safeguarded.

Owners of property not purchased for the scheme can bring claims for any diminution in value caused by noise, fumes, dust and vibration from HS2 but not until one year after it is operational.

4. What is the position for agricultural tenants affected by the scheme?

Tenants can also claim compensation for injurious affection, severance and disturbance. They are also entitled to compensation based on the value of the unexpired portion of their tenancy and any tenant’s improvements.

5. Is there anything I can do to maximise the compensation I get?

The burden of proof is on the claimant, so keeping evidence of any losses is critical. Consider whether achieving planning consent could increase the value of your property and ensure all planning applications are finalised or still valid. Until the route is safeguarded you are free to submit planning applications as normal. Identify any land swaps that may improve the holding before or after construction.

6. If I think I am affected, what should I be doing now?

Talk to a professional advisor about preparing compensation claims. Ensure all land titles and ownership structures are in order and correctly allocated. Ensure all tenancy agreements are up to date and properly documented. Lobby HS2 for extra mitigation measures, such as more tree planting. Consider whether you could benefit from the scheme by providing land for things such as plant storage and worker accommodation during the construction process.

7. What are the most important questions affected landowners should be asking their advisors?

8. I’ve received a letter from HS2 offering me £1,000 in return for allowing some kind of surveys on my land. Do I have to accept it?

This is part of the voluntary early-access agreement reached by HS2 Ltd with the NFU and CLA. You are not obliged to accept it, but HS2 does not seem keen to pay more and could eventually obtain a court order if it needs to come on your land to carry out its surveys.

9. If I need to take professional advice can I reclaim the cost?

10. Will the line continue past Birmingham?

The route to Leeds and Manchester is due to be announced in 2014 and completed in the mid 2030s. The plan is for HS2 to eventually extend into Scotland.