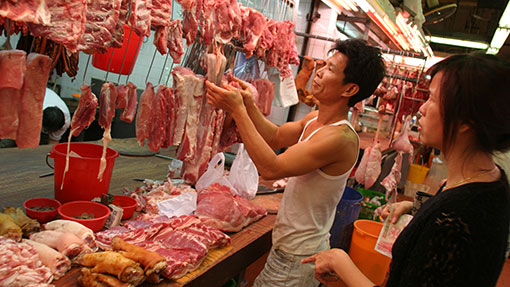 The UK has access to 101 markets for lamb and 92 for beef and EBLEX is working with government bodies to open up even more.

1. Hong Kong and Macau
These are key targets, particularly for premium beef and lamb. EBLEX believes the UK can sell even more there but marketing and branding are of paramount importance.

2. Mainland China
Mr Garnier calls China “the big prize”. Chinese demand for meat is insatiable and growing. Wages are growing 13% a year and the richer 1.36bn Chinese want to eat more meat. The UK does not have market access to China for lamb and beef yet, but exported 75,000t of pork there in 2013. EBLEX and BPEX are co-funding a new government post at the British embassy in Beijing to speed up negotiations on health certificates and export licenses.

3. Japan and the rest of the Far East
The Japanese market is expected to open up to British beef towards the end of this year. Though often overshadowed by bigger neighbours, it is the third largest consumer market in the world after USA and China. The Japanese want more grass-fed, high-quality beef, which is good for UK producers. Taiwan is expected to open up in the next two or three years for British beef, but Korea is likely to remain difficult, as its population prefers grain-fed meat.

4. Singapore
The wealthy city-state has been importing British beef since access was granted last year. Again, premium products are in highest demand.

5. India
The Indian meat industry is growing about 14% a year. It is a long-term goal to get British beef and lamb into the market but, with an Indian population of 1.2bn second only to China, the opportunities are impressive.

6. Sub-Saharan Africa
Mr Garnier says this region is “indispensable” as an export market even though it often receives little coverage. Demand for meat there is growing fast.

7. The Middle East
It will be an increasingly important market for premium lamb in the future, which can be sold at UK not New Zealand prices. Individual plants must be approved before market access is granted, but EBLEX expects exports to start this year.

8. Russia
“It is important – we cannot forget about Russia,” says Jean-Pierre Garnier. Progress on plant approval and market access is slow but there is great potential for lamb, premium beef and bovine offal.

9. USA and Canada
EBLEX expects the UK to be able to export beef to the USA and Canada this year and lamb next year. It can be quite a difficult market to crack as products need a lot of marketing support and getting US Department of Agriculture plant approval is an onerous process, but there are good prospects for British lamb and niche beef products.

10. Germany
Amid the exotic export locations, Europe should not be forgotten, especially the biggest player, Germany. There are good opportunities for lamb and premium beef as demand grows but a high level of presentation and service will be essential.