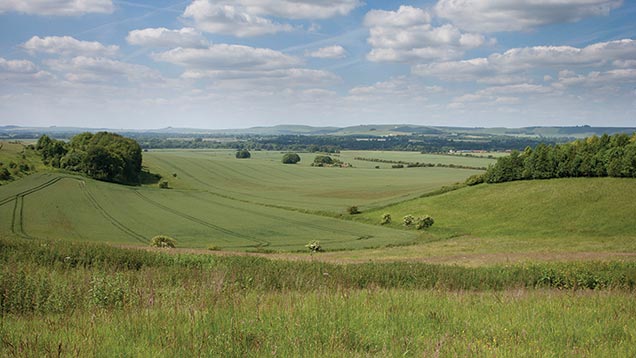 A Wiltshire farm with top-grade agricultural land capable of growing salads and vegetables is for sale.

The Manningford Bohune Estate has 1,240 acres stretching from the Pewsey Vale to the Salisbury Plain. Retirement brings the estate to market in two lots: 1,000-acre Manor Farm and the nearby 242-acre Kepnal Farm.

The land, undulating in places, is split into four ring-fenced blocks. About 140 acres is put to grass with the majority in wheat, beans, oilseed rape and oats for 2015. About 122 acres of the best land is let for intensive vegetable and salad production for two years in every three.

The farm has been subject to heavy investment with 2,000t of on-floor grain storage, three Dutch barns and a stable yard.

Money has also been put into diversification in the form of Manningford Trout Fishery, which has two lakes and is let on a business tenancy. There are also nine industrial units and nine cottages.

Savills director David Cross said: “This is a classic Wessex farm – long and thin in the Pewsey Vale with good land and water meadows which then goes up on to the chalky Salisbury Plain land.

“It is a really interesting farm because of its different income streams from the arable operation, fish farm, residential units and a good Grade 1 and 2 land.”

About 90 acres of woodland and bank fishing on the River Avon provide sporting potential.

The estate has an eight-bedroom, Grade II listed Georgian farmhouse, and is for sale at a guide price of £19m as a whole, or in two lots.