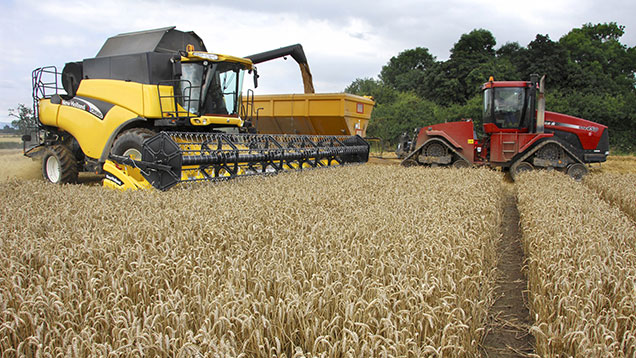 If you want a successful career in agriculture then you need to start planning how you are going to get there.

Benjamin Franklin, one of the founding fathers of the US, might seem an unlikely source of career advice in the agri-business sector.

But his words “by failing to prepare, you are preparing to fail” are particularly apposite if you are serious about climbing the career ladder.

The truth is, in agricultural roles it is possible to get stuck in a bit of a rut.

Not only is it easy to get sidetracked by day-to-day challenges, but people often choose not to move because their existing role is in a location they like.

And while it is not impossible to gain seniority in a business you have worked with for many years, it is tricky if the opportunities to progress are just not there.

Recruitment experts agree that individuals should be doing more career planning than is currently the case in agriculture.

They point to the fact that most people who find themselves in a senior position by the time they are in their 40s, have taken ownership of their career progression and set targets and goals along the way.

While some companies are taking this seriously, they warn that others also have no real plan in place.

To give a sense of what it takes to get to the top, Farmers Weekly asked the experts for their advice on how to climb the careers ladder in the wider agricultural sector.

They also shared some of the behaviours and skills that the best candidates for jobs typically display.

It is a buzzword that fills some people with dread. But networking is important and can be your passport to useful intelligence that can help your career enormously.

“If I was ambitious and I was coming out of Harper or Newcastle as a graduate, I would be thinking about the sort of role I want to do and then get in front of some senior people who are already there,” says Max MacGillivray of Red Fox Executive.

“To make the approach I would send a letter, not an email, because hardly anyone gets a letter anymore so it will stand out.

“I would say: ‘I’m ambitious and I would like to learn from you about the building blocks to success. Could you spare me 30 minutes of your time?’ If you can meet two or three people on that basis you will learn a lot.”

Good communication skills are perhaps the number one requirement for people to operate at a high level in agri-business. And while some of it just comes naturally, practice does help.

You need to be articulate and comfortable talking to all sorts of people and any size of group.

“Communication is important in every area, whether you are focusing on getting a deal, dealing with a disciplinary procedure or expanding your markets.”

Anecdotal evidence suggests the people right at the top of agri-businesses are those who make time in their diaries to think and not just “do”.

They are still in control of the business, but research shows they set about 25% of their time aside for thinking, whether that is when they are in the car or the office.

“They are thinking about how can we progress this business. Where’s the next opportunity coming from and where’s the next threat,” says Mr MacGillivray.

A good employee will always have options when it comes to who they will work for. So it is important to think about the sort of employer you are considering, how they operate and what they can offer you.

He points out the “business style” of the company, and how employers treat the end customer, can have a big influence on how individuals feel about their own roles.

Mr Thorley also advises people to quiz prospective employers about the opportunities they will be given to grow.

“Ask what they are doing to invest in people. How do I move to be a manager? Can you give examples of people who have moved through your business? You want to see the right attitude towards their employees.”

There can be a temptation to “chase the money” in the first few years of your career and salary will inevitably be an important factor in job decisions.

But recruiters say if you have an objective, then the priority should be to identify what you need to get in terms of experience to get there.

Finding people to work with who can add value to your career is a good route to success, says David Macaulay of Eden Search and Select.

If you talk to successful people they have often had a really good manager who has helped them to develop. “It can set you up for success for the next 20 years.”

Job-hopping can mean a candidate does not stay in roles long enough to make a difference to the business. So any future employer will ask questions of someone who has moved from job to job with no reasonable explanation.

There are no hard-and-fast rules for when moves are appropriate, so long as you can explain the logic and provide evidence of what you have achieved.

“Some people who are planning their career will look at roles – both internally and externally – every two to three years and they will take responsibility for doing that. But others will stay in the same role for five to six years,” says Mr Macaulay.

The best candidates for jobs take ownership of their own careers and are proactive about making it happen.

This might include picking up the phone to ask for more information about a certain job or requesting feedback on their CV, through to developing a relationship with a recruiter who can alert them if they want a new role in six months’ time.

“It’s your career, you have to take ownership of it,” says Brian Hutchison of Hunter Chase Consultants.

“Think about what you are truly fascinated by, as that will be something you will be willing to soak up as much information about as you can.”

For Guy Moreton of More People, success will ultimately come to those people who have the right attitude. In the farming industry people do like people who put themselves out for others, he says.

Employers will be on the search for people with a can-do approach.

“Be prepared to go the extra mile. Go along to an interview showing you have investigated the business. Arrive early. Demonstrate you are really keen and really energetic.”

People who work in agriculture tend to be less flexible about location than those in other professions.

Relocation isn’t a problem for the right individuals – so those who refuse to consider moving will be limiting their options. Recruiters also point out there are some great opportunities working overseas that are well worth considering.

That said, there is an appreciation it makes little sense for someone who has spent years building a customer base in a certain region to move away from that area.

The experts advise people to look at continual professional development opportunities, both within their existing company and outside of it.

You might want to consider an MBA – although it is not essential in agriculture – or you could look at a Nuffield scholarship or one of the Worshipful Company of Farmers’ management courses.

All of these will demonstrate you have initiative and drive.

What is meant by succession planning?

The phrase “succession planning” has a very clear meaning in agriculture – it is about the process of handing on a farm business from one generation to another.

Yet succession planning is also a critical issue for companies that work with farmers, either as buyers, suppliers or advisers.

It should also be an issue of concern to any farmers employing staff in critical parts of their business.

If a key employee retires or leaves the business and there is no suitable replacement in the wings, it can leave businesses in a mess. Succession planning, backed by a development programme for people coming up through the ranks, is a process which tries to minimise the risks of that happening.

The need for succession planning in businesses within the agricultural sector is paramount and there are many companies for whom it is a priority.

For example, firms in the arable sector have had to recognise the population of agronomists is an ageing one and they face a worrying shortage of experienced staff in future.

There is no one-size-fits-all method for succession planning, but it is something that should be part of every businesses’ plan – whether they employ two people or 2,000.