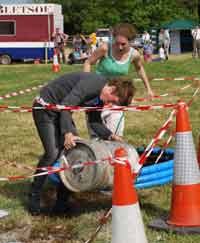 Northamptonshire YFC had traditionally held its annual rally as a competitions event, with only Young Farmers and close friends and relatives attending.

This year, the rally hosts, Thrapston YFC, decided to create an event which would, hopefully, become an annual fixture in the local community for businesses, farmers and the public.

With 35 trade stands in attendance – and over 600 people through the gates – the day was a resounding success.

Thrapston YFC, keen to encourage other counties to think about raising their profile, share a few tips with us about creating a successful event

Involving a local livestock auctioneer and rural surveying firm, Bletsoe, was a good move. They helped us along the way and their contacts proved very useful in attracting the big-name trade stands. Also, spending money on marketing to attract the public. About 30% of the crowd were thought to be unrelated to the farming community, so it really helps get the YFC message out there, which is always helpful for recruiting new members and fundraising. 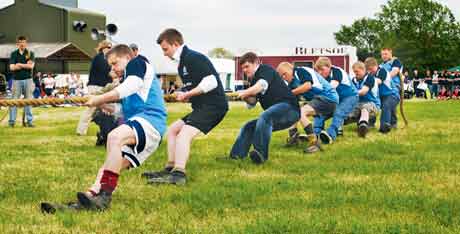 In the early stages of planning the rally, the committee received some sceptical feedback about whether we could achieve what we were aiming for without losing money. Luckily, with careful planning and budgeting we were able to overcome these barriers and proceed with confidence. Also, on the day, our main ring attractions involved YFC competitions and external guests who did displays and demonstrations. When some competitions over-ran, we had to quickly reschedule some of the displays (but we don’t think anyone noticed).

The YFC competitions in the main ring were the highlight for the crowds. They bagged a front row seat (or straw bale) and sat there for 3-4 hours while they watched tug of war, hound parades, assault courses, lasso displays and, of course, the grand finale, which involved plenty of molasses and flour. Also, for the Young Farmers competitors, the watching crowds provided a little extra pressure when shearing a sheep or trying to reverse a trailer.

There were a few minor glitches on the day, which were smoothed over before anyone had noticed. For us as a club, we had to scratch many of our entries for the competitions, as our members had been too busy setting up the site to enter any of them. This meant we came third, but we hope that people will remember the enjoyment of the day rather than who the overall winners were.

Why did people enjoy themselves?

For the attending trade stands, there was the chance to invite clients and to win new business, and also to associate their name with a successful event. For the crowds, there was always something going on to watch. We offered refreshments, entertainment for the children and a low entrance fee all provided excellent value for money for a day out.

And, lastly, for the YFC competitors?

The chance to show off our skills, recruit new members, learn team-working and organisational skills and, most of all, celebrate at the unmissable after-party.