As wealth spreads across China, consumers are eating more meat and China now dominates the world’s meat trade and production.

The country’s consumption over the next decade is expected to increase by 12% for beef and veal, 16% for pigmeat, 30% for sheepmeat and 17% for poultrymeat.

And while this growth is actually expected to slow as China’s economy does, according to analyst Rabobank, the country’s demand for meat will still be high in absolute terms thanks to its swelling population, currently at 1.34 billion. 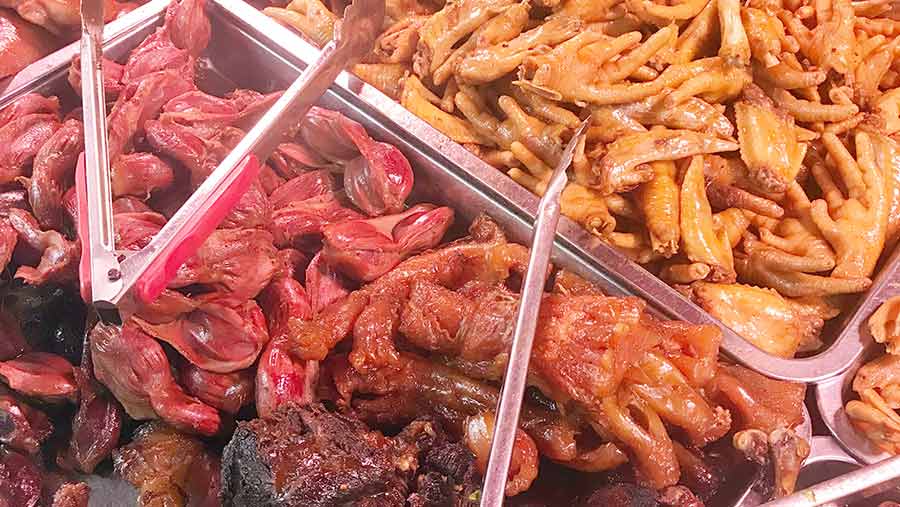 Meat on sale in China

What are the opportunities for UK producers?

The biggest and most immediate opportunity is for pig producers. China consumes half the world’s pigmeat and 60% of the meat Chinese people eat is pork.

The Chinese also have a “nose to tail” attitude, using everything from ears, noses, trotters, intestines and tails in everyday dishes.

This provides UK farmers with an excellent opportunity to balance the carcass, sending cuts that are of low value in the UK, but prized in China, ultimately adding value to the overall return on each pig.

Chinese meat buyers say that ensuring that such products are treated by exporters as high-value in terms of butchering, transportation and presentation is key.

Mick Sloyan, strategy director for pork at the AHDB, estimates that exporting pigmeat around the world adds £25 to the value of each UK carcass, with China accounting for £7-8 of that.

Last year, China became the UK’s biggest pigmeat importer and is now taking about £75m of business from UK pork processors, or about 10% of the UK’s overall production, he says.

Currently, three UK processors are licensed to sell to China – Cranswick, Karro and Tulip. All are poised to sell more once approval for further products, such as trotters, is given, says Mr Sloyan.

Both beef and sheepmeat consumption are still way behind that of pork, but are growing and present a big opportunity too, he says.

However, the UK does not yet have access to the Chinese market for beef or sheep because of historical fears about disease.

Opening up further trade is a slow process and requires a lot of relationship building, and UK producers should not expect trade to begin for several more years, says Mr Sloyan.

“Like anything in China, it’s a long road. We have to work very very hard to convince them we have safe food, and we’re competing against a lot of others.” 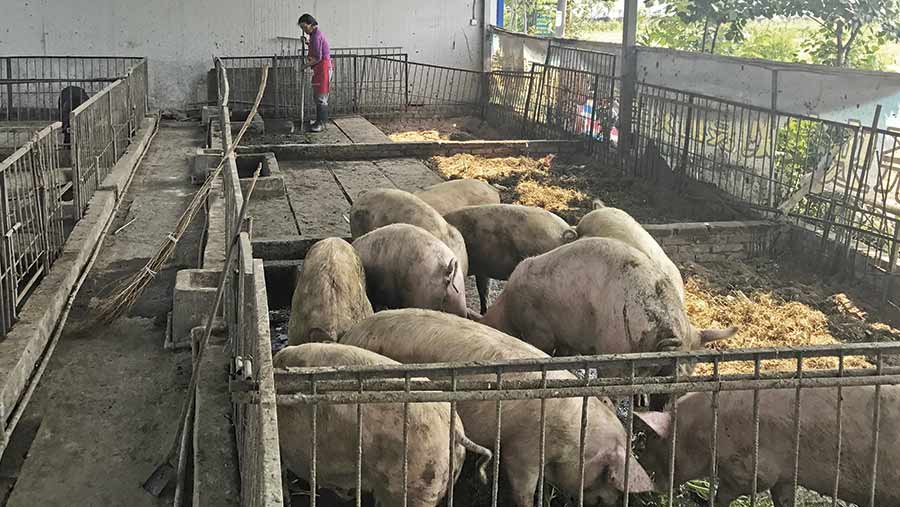 Many pig farms in China are still very small

The opportunity for pig producers might be larger and more immediate, but access for beef may open up more stable trade in the long term.

From the evidence so far, it is impossible to rule out the possibility that China could become self sufficient in pork in the future once people have been trained up and farms set up, he warns.

There is also a big ramping up of production expected in beef, says Mr Herzfelder, with a switch from traditional farms with one to 10 cattle, to large feed lots.

“It’s a much smaller market but it is really growing. We are starting to see chains of steak houses and more high-end ones.”

But as a market, beef is much less volatile than pork, he explains, because beef production takes longer, including to expand.

“Beef has been much steadier and I think there is unfulfilled demand,” says Mr Herzfelder. “I think there is a more secure opportunity in beef – it is less likely to be hit by a swing in production.” 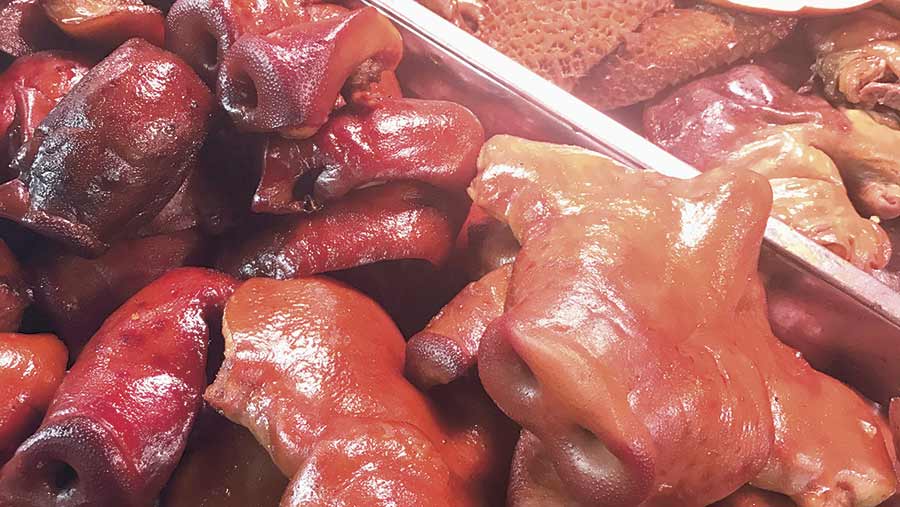 Pig snouts on sale in China

UK producers and processors certainly shouldn’t put all their eggs in one basket with China, warns Mr Herzfelder.

“The problem with China is you have these large swings one way or the other. The Chinese meat market is very volatile because it is such an enormous market – that’s the problem for anyone wanting to sell here.

“Last year there was almost a riot [at a big international trade show in Shanghai] – China needed to buy lots of pork and there were rumours Europe would have a shortage. Fifty buyers were queuing up at stands.”

Exporting countries should therefore be ready to meet a sudden surge in demand, but not rely on China as a trading partner. 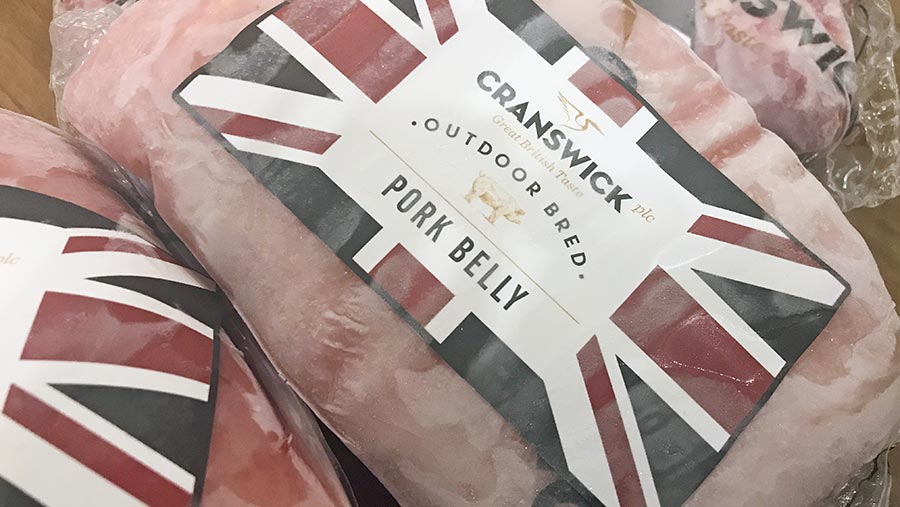 “If we lose China, it would reduce the pig price in the UK,” says Ed Wright, trading manager at pig processor Cranswick, which ships about one-third of its production to China.

The company accounts for about 65% of the UK’s pork market in China, shipping 50 containers containing 24t of pigmeat every week and supplying 50 types of products.

Most of its products are fifth quarter and include bones and the head, which would otherwise go into rendering for fish feed, he says.

The British brand didn’t hold much sway to start with, says Christine Yue, Cranswick’s general manager based in Shanghai, but through relationship building over several years this has improved.

“The UK has a very good image in most people’s hearts – people think of the heritage. Using a British flag on packaging is very much about showing food safety to reassure people.”

Relationship building, or guanxi has been critical, she adds. It is really important to find a good partner who will help navigate the rules about specifications.

High welfare is a growing market

The high welfare market is very niche still, says Mr Wright, but it has big potential, particularly as the younger generation travels more and sees outdoor-reared pigs in other countries.

Cranswick is trialling high-welfare products on online retailer JD.com and adding value by marketing it as outdoor-reared, RSPCA-approved.

“The potential is huge,” says Mr Wright. “JD has 150 million users. There’s some serious potential out there.”

But pig processors could do with a bit of extra help from the UK government, says Mr Wright.

Denmark is a massive exporter to China and its government, including the prime minister goes out to China a lot talking about pork. Chinese government officials have been invited to Denmark and France multiple times, but to the UK only once, he says.

A large number of staff in the UK government have now been reassigned to deal with Brexit and Defra is not always on Theresa May’s radar, he says.

Approvals have to be government-to-government level, so relationship building has to be done at this level too, he adds.

“We need to strengthen our team of people in the UK to drive exports out here.”

When the Chinese president next visits the UK, he needs to be taken to a pig farm, says Mr Wright.

“We want to invite the president to visit our pig farms and see the level of welfare standards the UK can offer.”

How can farmers get in on the action?

Trade to China helps all producers by increasing overall demand and raising prices. But producers can also have a more direct involvement.

All these companies have aspirations to expand exports to China in the coming years, says Mr Sloyan.

Improving the UK’s access and overall trade to China is important to the price all producers receive.

To ncrease this, UK government involvement and backing is essential for opening up access, since doing business in China is all about building relationships and that includes at the state level.

Ask your MP to put pressure on the UK government to build relationships with China and to push for access for beef and lamb and more fifth-quarter pigmeat products.

The UK does not currently have access to China for beef, sheepmeat or poultrymeat, but this is actively being worked on by AHDB and the Foreign Office, so keep an eye out for developments and keep in touch with your processor to see if it has China in its sights.

AHDB Beef & Lamb and AHDB Pork are a good source of information. Karen Morgan, the British food consul working in China to open up access, can also be found tweeting at @kaylmor.

Beef producers in particular could look at the Hong Kong market, Unlike the Chinese market, which requires a lot of additional checks, Hong Kong accepts UK products given EU approval.

Meat market opportunities at a glance