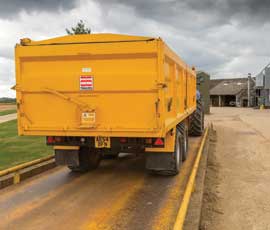 One of the UK’s leading agricultural trailer manufacturers has been fined after workers were put at risk of developing asthma.

Marston Agricultural Services allowed trailers to be sprayed with isocyantate-containing paint without analysing the potential dangers and protecting workers from the effects of the chemical.

The failings came to light after the Health and Safety Executive (HSE) made an unannounced visit to the Lincolnshire-based firm in Marston in June 2011.

Inspectors found the isocyanate-containing paint was being sprayed in large quantities and that the respiratory protective equipment and spray booths were not being used correctly, Grantham Magistrates’ Court heard.

The spray booths had not been maintained properly and were in poor condition. They were being used with the doors open and parts of the trailers were protruding into the workshop, meaning there was potential for significant exposure.

Staff were provided with personal protective equipment, but overalls were ripped and the gloves were not suitable to prevent the chemicals breaking through to infiltrate clothing and skin, the court was told.

HSE inspector Emma Madeley said: “Breathing in isocyanate paint mist can cause asthma and paint sprayers are about 80 times more likely to get asthma than the average worker.

“Continued exposure may lead to permanent and severe asthma for which there is no cure.”

Marston Agricultural Services was founded by Ernest Green in the 1950s. According to its website, over the last 50 years, it has become “one of the market leaders in the manufacture of agricultural trailers and allied equipment”.

The company manufactures an extensive range of agricultural and industrial equipment for the UK and export markets, including AS, Griffiths, Collins, Salop, ECE and Wootton/Gull.

Speaking after the case, a spokesman for Marston Agricultural Services said: “The problems arose in large part due to issues with communication within the business.


“Those issues have now been thoroughly addressed and both we and our external H&S advisers are entirely satisfied with the processes and procedures now in place to manage health and safety within our business.


“We are also thankful that the extensive health surveillance we have undertaken has confirmed that none of our employees have been adversely affected by any of the issues within the factory environment.”

Read the latest news on Farm health and safety