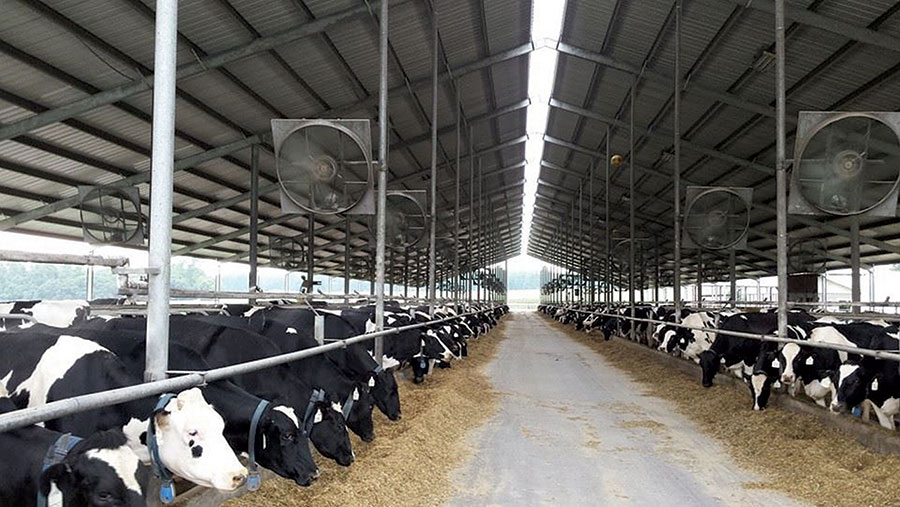 Submitted picture DO NOT REUSE

US milk producers appear to have all the tools to ride out dramatic swings in price.

They can use futures markets to lock in returns or feed prices, or insurance schemes to guarantee the margin between milk prices and feed prices – answers often touted for the UK.

But these aren’t without challenges for farmers. Producers are able to hedge both their feed costs and milk prices on the Chicago commodity exchange.

For the cost of engaging a broker and the financial risk of putting money into a cash futures account, farmers are able to buy or sell at a known price that suits their business.

A deposit, called a margin or performance bond, of more than £1,000 is needed to cover possible losses, while basic brokerage costs a few dollars a contract.

The futures market is also a useful guide on where prices will be in the months ahead, letting producers plan, even if they prefer not to hedge themselves.

Sarina Sharp, risk manager at Ag Business Solutions, a US farm consultancy, says trading in futures is relatively common but plenty still shy away, as it can look intimidating.

She says both small and big farms (and big in the US means several thousand cows) can suit futures, though larger units can use them more flexibly, buying and selling contracts when needed.

This is because each futures contract covers more than 90,000 litres of milk – a significant chunk of a smaller farm’s production.

“The goal of futures trading is not to outsmart the market, but to smooth out some of the volatility in dairy earnings,” she says.

“Dairy producers who hedge will generally enjoy lower peaks in the good years, but they will compensate with lower valleys in the bad ones.”

Mark Rodgers, who milks 390 cows at Hillcrest Farms in Georgia, says he keeps a close eye on the futures markets but has not tried trading himself.

He has kept debt levels low, which helps in the rougher years.

But he has control over most of the cost – he grows his own maize and ryegrass silage and buys a year’s supply of cottonseed and citrus pulp as soon as they become available from local growers.

“Any kind of marketing always has a cost,” he says. “Someone has to make money on it and you are paying for peace of mind.

“As long as we can stand the low prices for a year or two, we can then make money when the times are good.”

Last year the US government unveiled another tool for coping with volatility: the margin protection program (MPP).

Insuring the basic margin of $4/hundredweight (5p/litre) is free – with premiums rising for cover of up to $8 (10p/litre).

“As long as we can stand the low prices for a year or two, we can then make money when the times are good”
Mark Rodgers, Georgia farmer

Under this farmers are able to insure a known gap (the margin) between milk prices and feed costs. Sign-up is once a year for a $100 (£65) registration free.

The MPP uses published national averages for milk prices and the cost of a typical ration of corn, soya and lucerne.

This would leave a margin of $7.94/hundredweight (11p/litre) and would mean producers with US$8 coverage would receive a payment of 6c/hundredweight (0.08p/litre) for the proportion of production covered.

It has been very popular: more than 23,000 dairy farmers, over half of the US total, signed up for the first year of coverage in 2015.

But Gerald Fieser, who milks about 600 cows in Florida, says he has been very disappointed.

His case illustrates how an all-embracing scheme using national averages can leave some producers with less protection than others who pay for the same level of cover.

Mr Fieser is in an unusual situation, with only 120 dairy farms left in his state and his milk destined for the liquid rather than the manufacturing market.

This means his milk price is less linked to the US average used in the MPP.

His farm is also far from the main corn-growing regions of the country, pulling up his relative costs.

This year Mr Fieser took out the $6 (7.6p/litre) insurance on the MPP, which has not paid out despite his milk price falling more than one-third to $18/hundredweight (22p/litre).

Mr Fieser says he treats the MPP as disaster insurance and will go for the minimum $4 deal next year, as the national feed and milk figures used are not relevant to him.

His grain costs are higher due to long-distance haulage and he supplies milk into a local market.

“To come up with those values does not really mean a lot when I try to compare it with a real-life scenario,” he says.

Mark Stephenson, director of the Center for Dairy Profitability, University of Wisconsin–Madison, says most dairy producers have not taken full advantage of the tools available.

But he says the largest farms, typically with more than 5,000 cows, have become the most risk-conscious.

“They are pretty sophisticated marketers.

“Many of those larger farmers are mentally different: they are approaching this as a business and not as a lifestyle.”