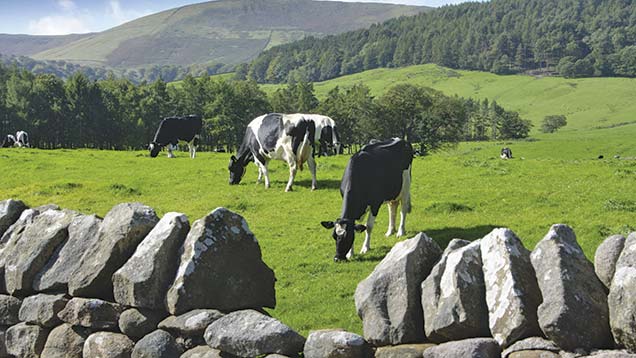 British dairy farms will steadily specialise as either high-input or extensive-grazing systems now milk quotas have ended, a study has predicted.

More mixed systems could become less popular as the most efficient farmers try to match their production with their milk buyers’ needs, according to Promar International.

But the speed of change will depend on the milk price.

See also: Milk quota abolition – Everything you need to know

Milk prices lower than 22p/litre could see many farmers driven to low-cost Irish-style systems, while prices above 29p/litre could mean many farmers raise production and processors would not need to source milk from more isolated areas, such as west Wales.

Promar senior consultant Andrew McLay said the UK had to make more of its comparative advantage – growing forage and converting that low-cost feed into milk.

But his report said the UK was drifting towards more intensive, US-style dairying, due to a processing sector geared towards a level milk supply and salesmen promoting high-input systems.

“We have a great pasture-growing facility, we have a great climate, we have relatively good land availability and we have got bigger herd sizes already,” Mr McLay said.

“We have all these assets and natural benefits; the UK has to produce more milk or it is totally underachieving.”

Promar’s report, The European Dairy Industry Towards 2020, forecast the size of farms would grow with quotas gone, with Denmark and the UK still having the biggest herds.

But the average herd in the top nine EU dairy nations might only reach 116 cows, smaller than California, Australia and New Zealand.

UK production could rise from 13.7bn litres in 2013 to 15bn litres, according to Promar’s low estimate.

The upper estimate is for the UK to hit 16.1bn litres.

The current low milk prices could see Britain’s milk output shrink as some farmers decide to quit, but growth could resume once world markets improve.

“Although the Russian import ban and slowdown in Chinese demand may temper production growth in 2015, and even 2016, a return to more favourable external factors in subsequent years will see a return to strong milk growth in Europe,” Mr McLay said.