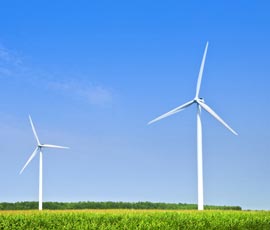 Farmers across Europe are wrestling with the same pluses and pitfalls of renewable energy, according to researchers.

Speaking at last month’s All-Energy exhibition and conference in Aberdeen, researchers from the city’s James Hutton Institute compared renewable energy production in Aberdeenshire, the Wendland-Elbetal region of Germany, and Vysocina in the Czech Republic.

Anti-AD protestors objected to maize monoculture and potential smell, while in the Czech Republic people got particularly irate about the effect of renewables subsidies on overall energy prices, she said.

“Recently we’ve found that Scottish farmers have become much more proactive in working with their local communities, especially talking about their plans ahead of time and on a one-to-one basis,” said Dr Sutherland.

All three countries seemed to face the same perceived problem of “saturation” before renewables technologies had been implemented on the majority of farms – owing as much to public acceptance as to physical limitations.

In addition, technology and installation costs were rising, subsidies were being squeezed, competition from energy companies was growing, and profits were by no means assured, she said.

“It’s not like many technologies, where the pioneers take the risks and the followers reap the rewards. We’re witnessing something of a ‘bandwagon effect’, but farmers need to be careful not to jump on without being very sure of the business case.”

“Many farmers see biogas production as a way of ‘future-proofing’ their farms,” she said.

Selling electricity into the grid and waste heat to local homes created a more diversified income, and “free” fertiliser and heating for greenhouses reduced farmers’ exposure to spiralling prices.

However, AD could fundamentally change the use of a farm, especially if maize was grown in quantity to feed the digester.

Aberdeenshire’s farmers preferred wind technology, partly because it was simpler and also because they couldn’t easily grow maize, she added.

“It’s becoming a prestige thing, too. Having a wind turbine on your land is seen as a sign that you’re a good businessperson.

“We’ve also found that, once farmers get involved in one form of renewable energy, they tend to expand it or go into something else, such as solar panels or biomass heating. It opens your eyes to what you can achieve.”

Even hydrogen was on the radar. “Several farmers see a future for hydrogen cars, vans and tractors, run on energy produced on-farm,” added Dr Sutherland.

German renewables villages in the spotlight