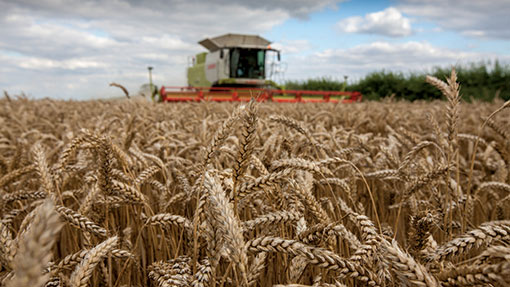 Total income from farming rose by £743m (15%) between 2012 and 2013 – as the industry stepped up its output of top-quality food, including potatoes, poultry, milk and barley.

The new data shows the overall value of livestock and livestock products increased by £1.1bn to £14.2bn in 2013.

Cereals were a mixed picture. The value of wheat fell for the second year in a row by £64m to £2.1bn.

Although there was an increase in wheat yield overall, production was down 12% as the area harvested was 19% less than in 2012.

However, the quality of the wheat crop was better than in 2012, which was a factor in the overall price increase of 10%.

Defra secretary Liz Truss said the figures underlined that food and farming are the powerhouse of the UK economy.

“From potatoes to poultry, our farming industry is showing that it is leading the way in producing top-quality food that is desired across the world,” added Ms Truss.

“Our farming sector employs more than 400,000 people and their success is helping us deliver the government’s long-term economic plan.

“We know British consumers value British food, but we want UK farming to be a world leader, exporting quality products far and wide as well as thriving on the home front.

“Our push for better food labeling across Europe is just one of a host of ways we are working to help this crucial sector to grow and drive growth.”

* The latest total income from farming figures can be read online here.