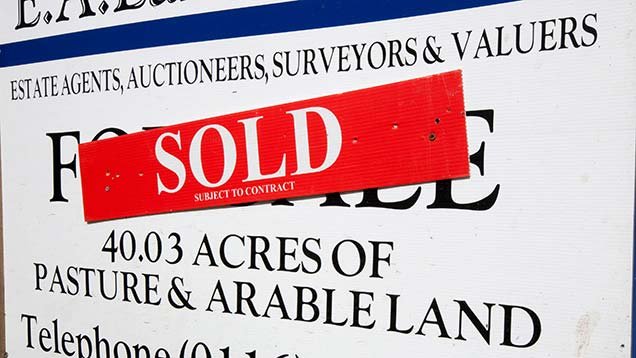 A continuing tight land supply has led to further increasing values in 2014.

The Farmers Weekly land tracker, which monitors land advertised in the magazine, shows that publicly marketed farmland fell by more than 19% on the year, to just over 112,000 acres – the smallest volume since our records began in 2005.

Meanwhile, the average price of land, increased 12% to £7,689/acre for bare commercial farmland, according to Knight Frank’s farmland index.

It looks as if that trend of rising values is set to continue in the coming year, but at a considerably slower pace. Our agents’ views are unanimous on that point.

Despite the improving residential markets, it is also clear that properties with a large residential slant remain less favoured, while large swathes of commercial bare land are in strongest demand.

Over the past year, farmers seeking to expand have had to compete with non-farming investors, and that is likely to remain the case in 2015. But the pressure on agricultural commodities, particularly wheat and milk, has taken the shine off farmer demand, which could in turn affect rents and commercial returns.

There are other uncertainties in the market place. The general election could hail a change in the tax treatment of farmland, with the controversial “mansion tax” raising tremendous concern in the Home Counties in particular.

CAP reform and the move to basic payments, as well as changes to environmental schemes, are also likely to undermine farmer confidence in the short term.

Interest rates look set to rise towards the end of the year – although mortgage lending to the farming sector remains solid.

On the positive side, demand for renewable energy – while no longer booming – is firm, and will continue to affect land prices in some areas.

In supply terms, tight cashflow on farms could result in small parcels of land being released, which are likely to be snapped up by neighbouring landowners. Sadly, further consolidation in the dairy sector looks likely, which could bring more farms to the market.

There remains a sizeable private market in farmland, particularly where large investors are concerned. It is clear that land quality has become increasingly important, resulting in a large gap between the best and worst land.

Woodland and amenity land will continue to attract buyers, and with house building continuing apace, the number of farmers with rollover funds to invest is growing.

Farmland remains a safe investment, but tight margins mean careful budgeting will be more important than ever.