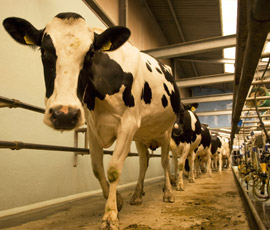 Dairy processors need to be consistent in their pricing and increase farmgate milk prices from 1 September in line with global market returns, farming unions have said.

The plea coincides with a DairyCo report saying average farmgate milk prices in June in real terms were similar to those paid to farmers in the early 1990s.

Despite record high average farmgate milk prices of 30.77p/litre in June – up 0.81p/litre on May – prices in real terms – taking into account the influence of average UK inflation – were similar to June 2002 and lower than the spike in prices in 1995-96.

Farmers For Action chairman David Handley this week warned of further protests unless prices increased to 34-35p/litre by 1 September.

Actual milk price equivalent, which tracks UK butter and powder wholesale prices, had risen 1.2% to 39.3p/litre in July from 38.8p/litre in June, indicating better returns from the market place, he said.

The dairy industry was at a watershed moment and the pressure was on for processors to increase prices by 1 September, said NFU chief dairy adviser Rob Newbery.

“Any sign of price rises for September are looking fairly faint now and any notion of nothing for October would be fairly serious and very bad news for the dairy industry,” he said.

Dairy farmers needed determinable milk pricing mechanisms, through the delivery of more formulaic contracts, in order to understand how their milk price was going to change, said Mr Newbery.

“Now is the time farmers need to be making investment decisions. We have got growing markets and our competitors are looking at how they invest and grow. We need to keep up with that growth.”

Farmgate milk prices needed to deliver at least 3.5p/litre on top of cost of production to allow for investment, he added.

“If we want to get our farmers to understand the market, whether it’s up or down, the processors will have to start being consistent. They use the market only to bring them [milk prices] down, but they use their competitors’ prices to stop them bringing them up,” he said.

Prices of 35p/litre were achievable by the end of the year on the back of a rising cheese market, supported by returns from both own-label and branded mature cheddar, said Nick Holt-Martyn from The Dairy Group. “The liquid sector will take its lead from cheese to remain competitive,” he said.