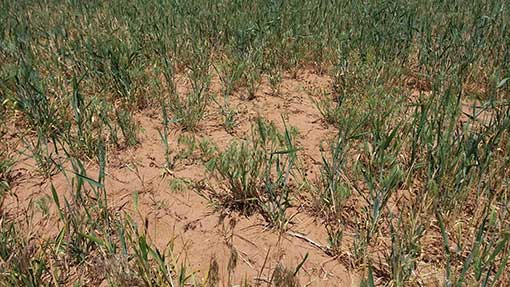 Wheat growers in south-west Oklahoma expect to harvest less than half a normal crop and fodder stocks are running out amid the region’s worst drought on record.

It is the third consecutive year of drought in some US states, with the coming wheat harvest expected to be 8% smaller than last year’s and yields forecast at their lowest level since 2007-08.

The US Department of Agriculture’s drought monitoring service shows 54% of the national wheat crop, 30% of the national corn area, 22% of soya beans, 32% of hay crops and 48% of cattle in drought.

Combining in south-west Oklahoma will begin in a couple of weeks’ time and most fields this year will not reach knee-high. Many will be less than a foot tall, said Sam Knipp of the Oklahoma Farm Bureau.

“Some farmers are mowing the wheat now and baling it for cattle feed. This will be the case throughout Texas, Colorado, Oklahoma and Kansas.

“Many livestock water ponds have gone dry and pastures have gone dormant or died. Some cities are worried about running out of water,” said Mr Knipp.

“Many of these farmers have crop insurance, but that basically just allows them to put in another crop. It does not necessarily put groceries on the table.

“Wheat is much better in northern High Plains, where they received good snows all winter.”

The 2014 Farm Bill provides compensation to eligible livestock producers who have suffered grazing losses due to drought or fire, which is often a consequence of drought. These payments offer 60% of monthly feed costs for up to five months.

The programme received more than 10,000 applications for help within a week of opening on 14 April, about 95% of them for the Livestock Forage Programme (LFP).

“The high number of applicants is no surprise considering the widespread, ongoing drought that has plagued livestock producers in the west coast and midwestern portions of the United States for nearly three consecutive years,” said US agriculture secretary Tom Vilsack.