With the aim of becoming a one-man system, Roundhouse building designer Geoff Simpson says improving handling and ventilation have been the two driving factors behind his design.

Capable of housing 150 beef cattle and costing about £45,000 – with groundworks, metalwork and other services bringing total expenditure to just under £100,000 – some farmers would question its economical efficiency.

But having gathered performance results from the three producers who initially trialled the building, Mr Simpson has concluded that savings of up to £18,000 a year areachievable on a system based on athroughput of 350 beef cattle a year.

Savings can be made partly due to a predicted 50-75% reduction in vet costs, due to fewer cases of pneumonia. “Superior ventilation also helps to reduce humidity, so cattle remain drier and use 15-30% less straw bedding.

“A round building provides fantastic ventilation, because air is channelled naturally through the 10m sq chimney at the top of the roof,” adds Mr Simpson, managing director of Roundhouse Buildings Solutions, Barnard Castle, County Durham.

Mr Simpson, who is looking at the potential of the building for other uses, including housing for a variety of livestock and companion animals, believes the Roundhouse can offer a cost-effective design option. It has also been well received by planning authorities in several counties, he says.

The building comes in one standard size, although additional Roundhouses can be linked to the original, to accommodate extra livestock. With an overall area of 905sq m, housing totals 718sq m, split into eight sections, each about 90sq m.

There are no walls to the building, he says. “A central steel kingpin joins eight roof trusses, held up by 16 perimeter supports. The roof is made from a single piece of tensile, PVC-coated fabric, assembled on the ground and raised using hydraulic rams.”

Capable of accommodating 150 cattle, the recommended stocking density is 4.7sq m for each 450kg animal. Features include a loading bay and circular handling pen in the central area, with animal pens having gate-free access for stockmen.

The roof deflects water into a series of hollow steel uprights connected to the supporting roof structure, channelling the water into a pipe at the bottom of the column for collection or disposal. 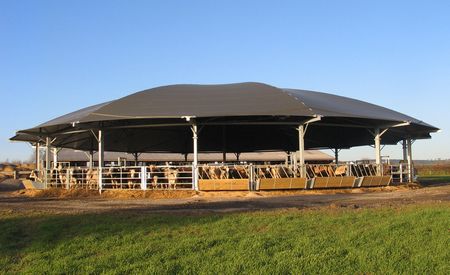 Although the £90,000 required for a roundhouse is a significant investment, it is proving its worth in terms of preventing ventilation and reducing finishing period.