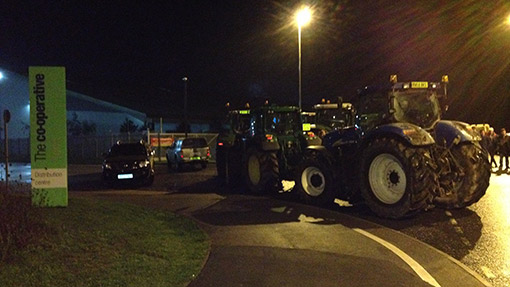 Dairy farmers have staged a fourth milk protest against plummeting milk prices by targeting the Co-op.

About 120 farmers used tractors to block the entrance to the Co-operative Distribution Centre in Andover, Hampshire.

From 8pm onwards on Tuesday (14 October) farmers prevented lorries from entering the 470,000ft depot, which serves more than 400 stores in southern England. The protest ended at about midnight.

David Handley, chief executive of Farmers For Action (FFA), which is orchestrating the protests, said the Co-op had been targeted as part of the group’s campaign to reverse the recent plunge in farmgate milk prices.

The Co-op has reduced its milk price to 30.4p/litre from 1 November. But Mr Handley claimed the retailer was planning to slash prices by a further 2p/litre soon.

Mr Handley said: “My understanding is that there is a threat of a further price cut coming in December that hasn’t been announced,” said Mr Handley.

“They have 206 farmers that supply them. If there was ever a situation where a milk price cut was not justified, I believe it’s the Co-op’s.”

A price cut would not be justified by any global impact because farmers produced liquid milk for the Co-op in the UK for consumption in the UK, he added.

“How do they justify a 2p/litre cut? Just because everybody else has done it, they have joined in.”

Mr Handley said the protests appeared to be having the desired effect because processors he was in dialogue with were now telling him that price drops may be coming to an end.

“That sends a message out to farmers that maybe carrying out protests does work,” he added. “If we hadn’t done anything, they would have made further cuts this year and into next year.”

FFA is planning to target Iceland Foods in Warrington, Cheshire, on Thursday (16 October) after the retailer slashed its price of a 4pt carton of milk to just 89p.

A further two to three protests are scheduled to take place against unnamed processors and retailers next week.