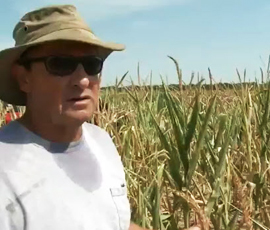 It is a dire outlook for both corn and soybean crop potential in the US, though corn is far worse than soybeans, says US analyst Martell in a report today (2 August).

Corn damage is severe, with July rainfall averaging only 1.72 inches which is 46% of normal rainfall, based on unofficial data. Temperatures were the hottest in more than 60 years at 79.9 F and 6.4 degrees F above average.

Growing conditions have been hotter even than 1988 when corn production fell 38-39% below the 1985-87 average. In that year, extreme crop losses were blamed not only on bad yields but also reductions in the harvested area, corn chopped for silage or not harvested at all.

“Yield estimates for the US national corn crop at 130 bushels per acre are still too optimistic, due to record-setting heat in July and way hotter than 1988,” said Martell.

Soybeans tolerate the heat better than corn so may have a chance to improve if rainfall increases. Rainfall had picked up in the Midwest recently, said Gail Martell but it would need to rain very heavily, with moisture deficits at 3.5- 4 inches.

“The problem with extremely dry fields is that rain is soaked up like a sponge, not benefiting the crop much.” 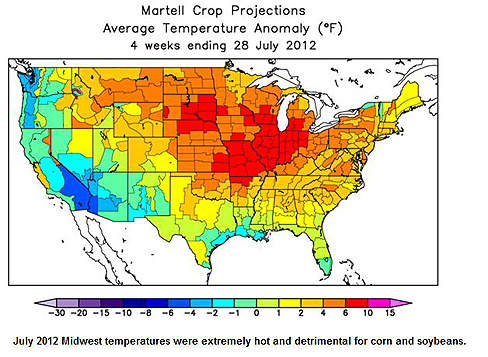 The most important period for yields is the pod-setting and bean-filling stage just now getting under way. On 29 July, 55% of beans were setting pods and starting to fill beans.

“Growers report that soy plants are very short, stunted by severe drought. However, the logic is that even small plants are capable of loading up with pods, if the weather becomes very wet.”

Near-normal rainfall starting in mid July and continuing through August in 1988 allowed the crop to improve but it still finished with a 23% production shortfall in that year.

Watch the video about the drought in the American corn belt