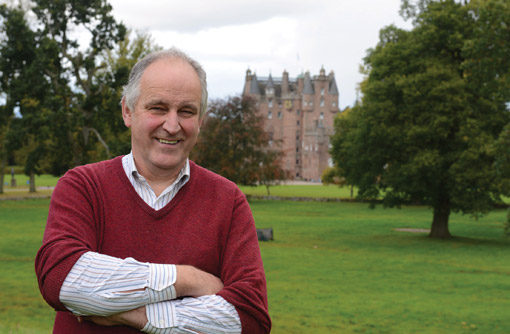 Juggling the demands of arable, pig and beef production across a range of soils and aspects on a large and diverse estate is the challenge facing David Soutar, farms director at the Strathmore Farming Company.

However, a focused and flexible approach, which allows changes to be made to suit market and climatic conditions, has resulted in an annual turnover of £3m, including £320,000 single farm payment, and a rolling profit average of 18% return on tenant’s capital. However, the results of the appalling weather this year and the current pig price could have a significant effect on this figure going forward.

Part of the Strathmore Estate, owned by the Earl of Strathmore, the farming company comprises 2,428ha ranging from 61m above sea level in the Strathmore Valley to 457m in the heather-clad Sidlaw Hills. The estate’s Glamis Castle was the childhood home of the Queen Mother.

The company ethos is based around four priorities, in order: health and safety, animal welfare, environmental safety and profit.

“We won’t knowingly jeopardise the first three for the fourth. We are in business to make profit but we have tried to work with the environment in mind,” says Mr Soutar, who has been working with the company for more than 30 years.

Environmental measures on the farm include 25km of hedgerows, including 5km established in the past 10 years, and similar lengths of beetle banks and waterside margins and moorland management.

“A challenge to the whole industry is getting the right people into the industry and keeping them.”
David Soutar, farms director

All three enterprises – beef, arable and pigs – are costed separately and the diversity brings a balance to the business, explains Mr Soutar. For example, the arable enterprise contract finishes the pigs for the pig breeding enterprise. “Our pig side pays our arable side the current rate and any use of straw is not an issue as the arable get it back as muck,” says Mr Soutar.

The key challenges facing the business are:

“A challenge to the whole industry is getting the right people into the industry and keeping them,” says Mr Soutar. “We work with a balance between employed labour, seasonal and third party labour including contractors.”

Mr Soutar manages a team of 12 staff comprising an assistant farm manager, graduate trainee, five members of staff in the pig enterprise including a modern apprentice, two full-time members of staff for arable and cattle, one full-timer for vermin control and general work, and two part-time office staff. Some other labour is sourced via the local machinery ring – Ring Link – which has more than 2,000 farmer members, and through web-based recruitment site 4xtrahands.