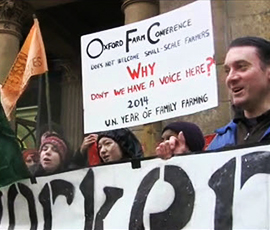 Campaigners have called on the Oxford Farming Conference to recognise the contribution of small-scale farmers and food producers.

Members of the Land Workers’ Alliance protested outside the conference venue as delegates arrived at the Oxford Examination Rooms on Tuesday (7 January).

The alliance – members of the international peasant movement La Via Campesina – is a group which campaigs for the rights of small producers and a better food system.

Spokeswoman Jyoti Fernandes told Farmers Weekly: “We feel like the message coming out of the conference is ‘Get big, get modern or get out. And we don’t want to get out.’”

Many small-scale producers wanted to remain small and produce food in a way they believed was most sustainable for the planet, said Ms Fernandes, who farms in Dorset.

Although some conference delegates were small farmers, the discourse was dominated by multinational corporations and biotechnology companies, she added.