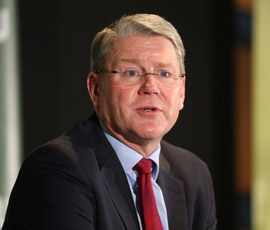 Farm leader Peter Kendall has ruled out a career in politics after announcing he is to stand down as NFU president.

The 50-year-old farm leader will stand down following the union’s two-day annual conference in Birmingham on 25-26 February 2014.

Saying the time was right to pass on the baton, Mr Kendall said he intended to spend more time on the family farm at Eyeworth, Bedfordshire.

“I do believe there is a time when you need to say, actually, it is time for somebody else to come in and re-energise the organisation,” he told Farmers Weekly.

But Mr Kendall also hinted at a career beyond the farm gate.

“If I can be involved in any way in putting more British food on more British plates – i.e. growing UK Farming plc – that is what I would like to have some input in as well.”

More on Kendall’s decision to stand down