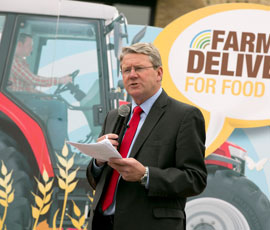 Buy British food and make it local – that was the message from Peter Kendall as he launched the NFU’s major new national campaign targeting consumers.

“For consumers I say this. Britain’s self-sufficiency in food has dropped by 15% in the past 20 years but I know everyone can do their bit by enjoying a more seasonal diet and eating more British food when it’s at its best.

“Buying more local food also helps to make a big difference to the communities closest to us. So, our message is simple; ask for British food. Make it British, make it local and make it happen.”

The NFU launched the campaign on Monday (21 May) at a special event in London that included a boat trip down the Thames followed by a presentation of a report on agriculture’s contribution to the British economy to MPs in Westminster.

And food exports increased by 11% last year, making the food and drink sector the UK’s fourth largest export sector, according to the NFU.

Launching the report, Mr Kendall said that farming had seen a reversal in fortunes in the last decade and was now seen as a profitable industry.

“I don’t want to dwell on the past; today is about celebrating all that farmers and growers deliver to this country and its people every day,” said Mr Kendall.

“But I do want to acknowledge what a tremendous turn around we have seen, certainly in the past 10 years. The NFU has re-stated and, over time, re-established the case for our productive farming industry.

“No-one now seriously doubts the need for this country to have an efficient, productive, environmentally-conscious British farming sector, or the value that it, and we as farmers and growers, can deliver on all fronts.”

Mr Kendall said the campaign was not asking for “special treatment”, but about “showcasing what farming delivers for Britain”.

He added: “We want to continue building on today’s good news story by working with government to replace, what can be, piecemeal and contradictory approaches to food and farming, to ensure there are policies in place that sees the UK becoming more self-sufficient; protecting its own food supply and building on today’s economic success story for the future prosperity and well-being of this country.”

The Food and Drink Federation (FDF) is also backing the campaign.

“We support this drive by the NFU to maximise the role our farmers can play in being more productive whilst being effective stewards of our natural resources,” said FDF director general Melanie Leech.

Campaign must hit the right tone

“Farming is on the up in terms of profitability. We are in a better place than where we were six years ago when the NFU launched Why Farming Matters,” he said.

“But the wider economy is not in such a happy place, so it’s going to be important that we get the tone right.

“We don’t want to come across as being arrogant, but that we are proud of our achievements.

“We need to deliver to other people’s agendas – and not just our own.”

Share your views on the campaign and tell us what activities it should embrace on our forums.