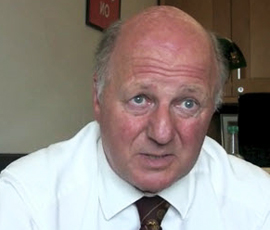 Milk processors who refuse to sign the dairy code of practice should explain themselves, former farm minister Jim Paice has warned.

Sir Jim was speaking to Farmers Weekly nine months after the government reshuffle that cost him his job last September.

He was moved from DEFRA just days after helping to broker the voluntary code of practice aimed at securing a fairer farm gate milk price for dairy producers.

Sir Jim said: “If I was sitting there [still in office] I would be saying to them why are you not signing up – what are your reasons for not doing so?”

The code had brought transparency to the market place, he added.

Sir Jim’s comments came as dairy farmers returned to the streets in protest at what they claim are unsustainable milk prices.

Lorries backed up in queues as farmers demonstrated outside the Arla site at Ashby de la Zouch, Leicestershire, on Sunday evening (16 June).