UK farming is among the most productive in the world, but also faces one of the highest cost bases. Paul Spackman speaks to the boss of leading farm management company Velcourt to find out why productivity must improve

It is 40 years since Velcourt started farming in the UK. In that time it has grown significantly and now farms about 53,000ha in the UK, 84,000ha in the Ukraine, 51,000ha in Russia, not to mention 4500ha in Hungary. What’s driven this growth? Well, the man at the top, chief executive and Dorset dairy farmer James Townshend, believes it is about giving people the skills and information they need to improve performance and find the best ways of doing things. Something he believes applies equally to the industry in general.

“Our objective is to employ thoroughly competent people at every level of the business to give them the best information available and allow them to make well-informed decisions,” he says. But he strongly rejects suggestions that this means farming to a blueprint. “The notion of a blueprint is a complete misnomer. We spend a lot of time communicating good information. But when it comes to marketing and procuring inputs, we’d be crazy not to use our combined size to do that. It also allows us to work more closely with suppliers.”

Indeed, as prices for both end products and raw materials become more volatile, he believes farmers and the supply trade must work together more closely. “We’ve already seen situations last season where there were product shortages (eg, for some key fungicides). But if we can find ways of working with the trade that don’t put us at loggerheads, perhaps some of these problems can be avoided. The challenge is making sure the price is right.”

Prices, whether for inputs or raw materials, have dominated the headlines this year. Despite its bulk-buying power, Velcourt has also been stung by these rising costs, principally fertiliser and energy. The firm’s average cost of production (fixed and variable) for wheat has jumped by £170/ha over the past 12 months, while potato costs are up £600/ha and milk production costs have risen by about 5p/litre.

“The dairy sector, in particular, has been incredibly challenged,” Mr Townshend says. “The relationship between cost base and milk price has been very uncomfortable for a long time and we’ve seen a large number quit the industry a process which is ongoing.”

There is also extra pressure now for significant capital investment to meet new nitrates legislation expenditure that is needed just to stand still and will not necessarily improve competitiveness, he says. “What’s more, across the industry, there’s a lot of equipment still being used that is 40-plus years old and there has to be a question mark over how long this can go on.” 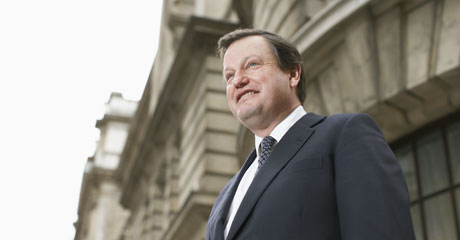 So, further rationalisation of the dairy sector is likely, he says, something that is also expected to be a feature of the arable sector, possibly exacerbated this year after increases in fertiliser and energy costs coincided with a dramatic fall in crop prices from their summer peaks.

“A lot of the inputs for the 2009 season have already been bought, so we don’t really expect to see much decrease until 2010,” Mr Townshend says. “There was a sense of euphoria throughout the industry [when cereal prices hit their peak], but that was pretty short-lived.”

However, while the short-term picture might appear somewhat gloomy, Mr Townshend firmly believes the fundamentals remain strong for farmers. “If we stand back and look at what’s going on, there is a definite need for an increase in global agricultural output.

“There are an extra 6m mouths to feed around the world every month and the fact food security was even on the agenda at the last G8 meeting suggests politicians have woken up to the fact that it’s a concern and are at least open to sensible ideas.”

What does the future hold?

With this apparent political change in mind, Mr Townshend says the focus for farmers across western Europe must be on improving efficiency and productivity to ensure they remain competitive on the world stage.

Succession planning and encouraging new entrants into the industry is one part of this, he says. “Our business is all about people and giving them the skills base they need to achieve top-decile performance.” But to underpin that, and prove to young people that agriculture is an industry worth coming into, he says there must be more money invested in research and development. 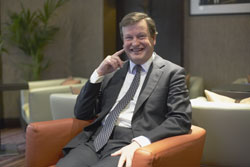 “For example, we’re told that wheat has the genetic potential to yield 19t/ha and oilseed rape 9t/ha. We’ve obviously got a long way to go before we’re achieving those goals consistently and there is a real need for more focused R&D to deliver benefits at the sharp end.”

That could include genetic modification, he adds. “I have an open mind on GM. It needs to be rigorously assessed, but if it can contribute positively, it should play a part. My family has a farm in Ohio, which has been using GM since it first came available and from an environmental perspective, it’s deeply efficient.”

But while food production is clearly top of Mr Townshend’s agenda, he does not dismiss the future for other diversified enterprises. He reckons there is scope for projects such as anaerobic digestion plants, wind farms, waste management and composting schemes, some of which Velcourt already has involvement with.

What about the environment?

Some environmentalists may squirm at the idea of governments putting more emphasis on food production, but Mr Townshend believes the two can go hand-in-hand, provided stewardship schemes – like inputs and R&D – are focused on the right areas.

“There has to be a question mark over whether the Entry Level Scheme is delivering any long-term tangible environmental and biodiversity benefits. Some parts of it are, but some aren’t. By comparison, our experience of the Higher Level Schemes, which are more focused is that they are delivering real benefits.

“There is a requirement for farmers to deliver the landscape and biodiversity benefits people want, but politicians need to focus on how that’s paid for.”

What should DEFRA’s role be in all of this?

DEFRA‘s primary role is effectively an industry regulator something Mr Townshend acknowledges is needed. But he strongly believes it should have the additional role of agriculture and food industry sponsor.

“Look at industry issues like knowledge transfer, application of science and technology, marketing and export of UK agricultural products, they’re all areas where DEFRA could play a major role. The fact it doesn’t means a host of other organisations are trying to do it. But none of them really has the resource base to do it effectively.”

He believes DEFRA should take more notice of the US Department of Agriculture, which is more proactive in encouraging and supporting farmers.

Left school at 18. Studied at the Royal Agricultural College, Cirencester.

1975: Graduated from Cirencester with a CDA and a Diploma in Advanced Farm Management

1975-78: Worked as a farm business consultant for a firm of land agents

1978: Joined Velcourt as foreman on arable farm in West Kent

1980: Took on management of intensive arable and root operation in Norfolk

1987: Became a director of Velcourt Group

A non-executive director of Openfield and Grosvenor Farms, plus he sits on the board of seven other companies operating in the property and agricultural sectors. Also a member of the Agricultural Forum and is an Associate of the Royal Agricultural Societies.

He enjoys all country sports, including hunting, plus skiing and sailing.

“All things to do with the countryside,” he says. “I like a ‘can-do’ approach, but can’t stand people with a ‘can’t do’ attitude. I think the world is full of opportunities, particularly in agriculture.”

“I left school at 18 to join the army, but a car accident meant I had to leave and that’s when I decided to go to Cirencester and get involved in agriculture.”