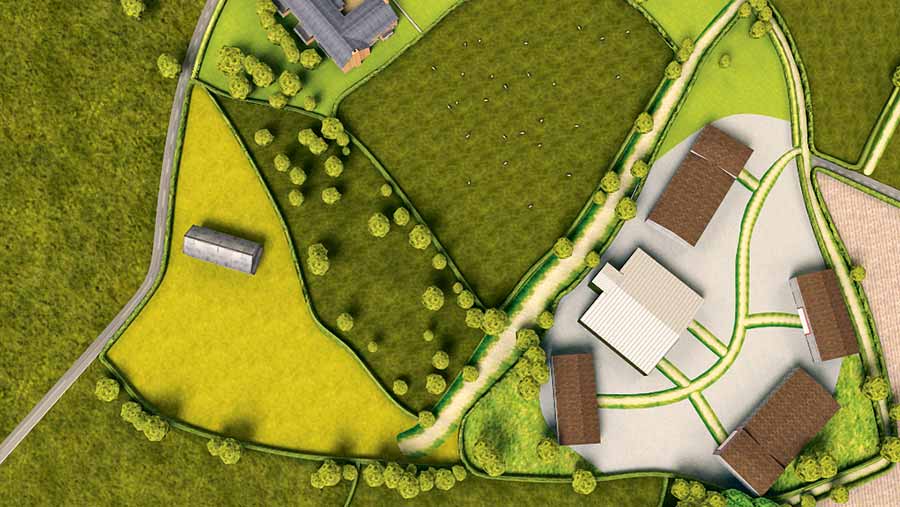 Crops on the Farmers Weekly/Savills Virtual Farm have not weathered the winter as well as last year, largely because of less-than-ideal autumn establishment conditions on some of the cropped area.

Recent wet, cold conditions have delayed crop development and field operations. Drilling the oilseed rape early to get it away from the flea beetle threat was a success, but crops have instead suffered more pigeon damage than last year.

At this stage we are not changing our budgeted yields, but will review them as we move into spring.

Grain pricing is heavily influenced by currency, and we are perhaps in better shape than was anticipated in both old- and new-crop markets.

Crop sales decisions are influenced by budgets and taking a view on the market.

So far no harvest 2018 oilseed rape has been sold. Prices have fallen relative to 2017, but there is potential for reduced soya production in Argentina to trigger an increase in the oilseed rape price.

Despite uncertainty on several fronts, investment must still be made where appropriate.

So, after reviewing the options, the decision was taken in the autumn to buy a new self-propelled sprayer costing £150,000. This will arrive early in April. The relative cost against the other main option of using contract services makes economic sense, given the farm size and number of passes.

The fallow period has been extended to run from 1 January to 30 June, with no cultivation or pesticide applications permitted.

Topping is allowed, but the relative cost is high compared with a pass with glyphosate.

So, where fallow is used for EFA and blackgrass is an issue, topping will be used, but it is difficult to square that timed use of glyphosate is not a better route than topping for ground-nesting birds.

The farm is looking at alternative ways of meeting its greening obligations. When BPS was introduced, nitrogen-fixing crops and fallow were used due to the other benefits they offer and their straightforward recording on the BPS application.

To keep things simple, we steered away from using boundary features for EFAs.

Now that in-field options are less attractive, we have reviewed our policy. Recent amendments mean field margins next to hedges are eligible EFA buffer strips, as well as those next to watercourses.

The farm will now will use EFA buffer strips and also hedges to meet the EFA requirement for its 2018 claim. Old ELS records have been used to reference hedge lengths.

Basic calculations show that using the combination of 1m margins alongside the farm’s hedges and watercourses as EFA buffer strips, plus EFA hedges, will meet all EFA requirements, allowing any fallow areas to be managed within the crop rotation.

Marketing of the 2017 harvest continues. We had expected the oilseed rape market to remain strong, but the remaining crop has been sold for £295/t plus bonus,with the market having dropped away since October. This price compares with a budget value of £310/t plus bonus.

With the Hull-based Vivergo bioethanol plant shutting early in November for maintenance, demand for wheat from Midlands farms decreased and prices weakened.

Cashflow requirements will dictate when the remaining 20% of 2017 grain is sold. The market is showing some signs of recovery and indications are that the Humber-based plant is coming back on stream.

As ever, market intelligence on crop issues in major production areas of the world will continue to influence selling decisions, but primarily we continue to understand costs and aim to sell at levels where profit can be achieved, rather than try to call the top of the market.

All of the farm’s spring barley crop has left the farm. It was sold through a harvest pool, but held longer in the hope of securing a lower-specification market due to its nitrogen levels exceeding 1.85%.

Some loads were delivered for malting with high levels of allowances. Following a rejection, it was decided to market the remainder as feed and overall the crop averaged £124/t.

Since the EU membership referendum, the clear message to farmers has been that direct payments will be phased out and replaced with a system of public money for public goods, focused on the environment.

We don’t know the timeframe over which payments will be reduced, but reductions are unlikely before 2021 if we commit to follow EU rules for an implementation period after Brexit.

The government’s recent command paper and consultation proposes two possible mechanisms for capping direct payments. Once introduced, the rates would increase progressively until all direct payments are phased out. The proposals are:

1. Direct payments are capped at £200,000 in the first year, then progressively reduced.

2. Apply progressive reductions to farmers’ payments, with higher percentage reductions applied to amounts in higher payment bands (as with income tax). Payments of more than £25,000 would face reductions:

The partners of the Virtual Farm have considered the potential effect on the business to help them make management and investment decisions.

Over the past six years the farm’s direct payments has averaged £167,000, although £180,000 better reflects current exchange rates.

The farm’s direct payment is less than £200,000, so would not be affected by scenario 1 in the first year of capping, but would in later years as the phase-out affects smaller-scale farmers.

These figures can only be considered a guide because the whole concept of direct payment capping and its thresholds and percentage reductions are being consulted upon.

The graph below, of farming profit before rent and finance are deducted, shows how much has historically come from agricultural activities and the amount which BPS has contributed.

The volatility of the agricultural element is clear.

The farm may be able to access increased environmental funding once the government’s “public money for public goods” scheme is introduced. The capping option would clearly have a significant effect straight away and incrementally reduce direct payment income in following years.

The budgeted wheat and winter oats prices have been revised upwards to £140/t and £135/t based on current markets, which remain robust, and taking into account tonnage already committed for the 2018 harvest.

Lower crop gross margins are the main reason for this, explained by a lower budgeted yield for oilseed rape and the increased fallow area.

Our revised greening policy should improve the margin in future. The gross margin budget for 2018 is 4% below the 2017 results. It is, however, higher than the projection we made for 2017 at the equivalent time last year.