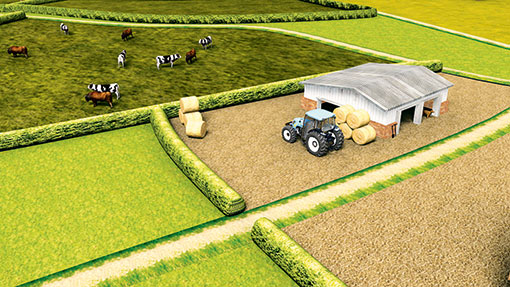 Dramatically lower arable output prices are challenging the Farmers Weekly/Savills Virtual Farm outlook, making it more important than ever that the correct management decisions are made

With crops on the whole looking well and a moderate rise in margins forecast, one of the main issues for the Virtual Farm in 2014 is likely to be selling prices, says Andrew Wraith, head of Agribusiness at Savills.

“Marketing strategies will be key but the ability to maximise output which influences cost of production on a per tonne basis will, as always, have a key role to play.

“Squeezing that last bit of yield through nutrition and fungicides so that the potential is reached will be the focus for us. Even though things are tight, it’s about how much you expect to get from every pound spent on the crop – but the sun and rain still have to come at the right times as the 2012 harvest reminded us.

“Despite the pressures of falling commodity prices we expect the cash position of the Virtual Farm to only deteriorate by £36,000 over the 12 months to September 2014.

“Consequently the business account should avoid going into overdraft, due to a sound capital base with manageable capital repayment commitments and drawings.

“This is in contrast to a number of ‘real life’ businesses which are locked into more punishing capital repayments and have higher levels of drawings as a legacy of more rewarding years from farming.

“The message is not a new one – it goes back to the fact that if you are doing a budget, then at least you can see what any changes mean for the business and it will help you to decide how to move forward.”

The Virtual Farm has an FBT covering 25% of the farmed area which is being reviewed this year. This is a 15-year agreement at a rent of £309/ha.

“This is an important part of the business but there is a balance to strike between open market tenders and the nature of longer term agreements, reflecting profitability and the marginal value of additional land.

“In recent years, the market has seen significant increases in tender rent levels which may well be the market but is more difficult to justify from an economic perspective for simple combinable crop rotations when market volatility and increased production costs are taken into account.

“The message here is to do a budget with sensitivity analysis before committing to a rent. And match the risk to your own circumstances not necessarily what you think you have to pay to get land.”

Support still plays a significant part in profitability on the Virtual Farm. Capping will have only a limited effect and the three-crop requirement is currently met.

Of greater interest is the final detail on Environmental Focus Areas.

England has not formally announced which options it will adopt but indications are that all relevant options will be available. Any feature included will need to be mapped with the inevitable concern over inaccuracies and penalties.

Harvest 2013 turned out a little better than feared. However this is the second year running that financial performance was below budget.

The overall impact on profitability against the January 2013 budget was a reduction in pre-rent and finance margin from £302/ha to £245/ha, primarily as a result of price falls. When single farm payment is taken out, this margin drops to £39/ha.

Poor conditions meant 69ha was uncropped or was abandoned.

Actual yields were nearer to 8.4t for first wheats and 6.9t for second wheats compared with the revised yield budgets for 2013 of 7.9t/ha for first and 6.4t/ha for second. This was helped by the fact that an area of poor crop was abandoned.

It was a similar story with oilseed rape where against a budget yield of 2.5t/ha, the actual out-turn was 3.3t/ha before accounting for the area written off. However when total planted area is included, the overall yield drops to 2.4t/ha.

“One further relatively bright spot was the decision to sow some of the failed crop land with spring barley on the back of a ‘produce of area’ contract at £195/t, basis 1.85% max nitrogen,” says Andrew Wraith, head of Savills agribusiness.

“At £550/t, seed was not cheap but the opportunity to put some land back into production was a gamble that paid off. Average yield across the whole was 6.15t/ha leaving a gross margin of £799/ha and in line with first wheat results.”

Anyone considering such a contract should check the small print carefully, advises Mr Wraith. The contract limited the tonnage at which the contract price was a paid to a maximum of 5.7t/ha. Anything over that left the farm at £150/t.

“We also considered growing maize across the fallow area on what appeared to be attractive terms for a local AD plant.

“Seasonal agreements with rental levels of more than £495/ha were considered, as well as purchase agreements for harvest maize based on dry matter.”

In the end the decision not to grow maize was probably the right one, says Mr Wraith. It allowed heavier ground to be sown with wheat in ideal conditions for 2014.

While production turned out not to be as bad as many expected in 2013, sales and pricing are a different story.

“We did stick with some forward selling against an overall budget average of £185/t.

“We may still average £168/t against a cost of production for the year of £142 including rent and finance.”

Oilseed rape was to be the most problematic in marketing terms. The budget sale price was £350/t plus bonus, compared with the first actual sales at £302/t plus bonus and a decision yet to make on the balance, with prices now down at about £283/t plus bonus.

Drainage works planned for 2013 have been put back to autumn 2014, with some remedial works carried out on land during dry weather last autumn. About 40ha will be redrained at about £100,000.

“With land values continuing to increase and strong competition for additional land either contracted or rented, optimising the productive capacity of owned land should be a main priority,” says Mr Wraith.

“It’s hard to be categoric about the expected return from investment but year-in, year-out, taking wheat at £150/t and a 2t/ha yield benefit gives an 11% return. In some years it will be the difference between being able to establish a crop or not.” 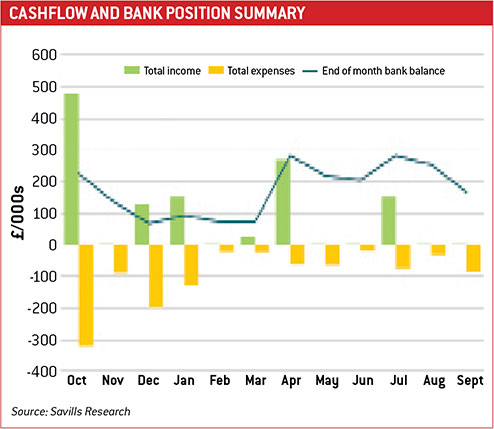 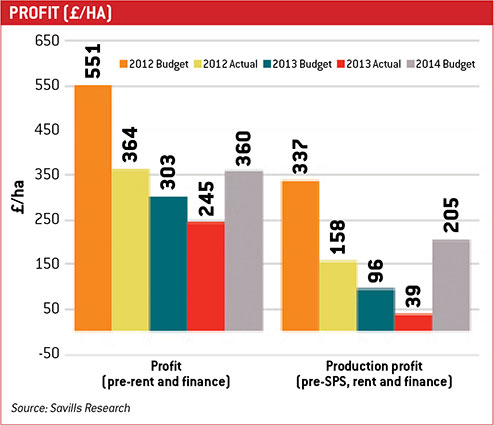 Despite the poorer year, the decision was taken late in 2013 to continue with a planned change of combine. This meant: