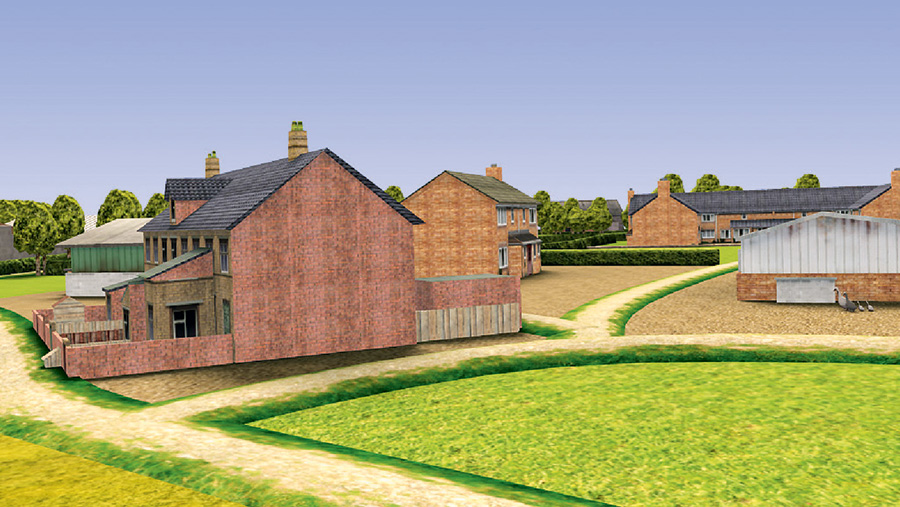 The benefit of forward selling and higher-than-anticipated yields offset market price falls for the 2015 harvest year at the Virtual Farm.

“Having made good early sales we have chased the market down with the last feed wheat being committed at £103/t, with the overall average price for wheat expected to be £123/t for the season,” says Andrew Wraith, Savills’ head of agribusiness.

See also: Why you should use benchmarking data on your farm

Harvest 2015 brought yields 12% higher than budget, and this, along with the remainder of the budget yield was sold in January and February for between £103/t and £109/t.

The farm has usually received its support payment in early December but had a three-month wait for BPS until early March, making that extra yield a significant help to cashflow, says Mr Wraith.

“The ability to store adds flexibility to marketing which has helped with forward sales and longer holding.

“The results show that we have been really helped out to generate this figure by an early sale policy, which we have continued for 2016 harvest.”

The farm’s oilseed rape was sold for an average £257/t plus bonus.

Here again, storage helped the farm to have a flexible marketing policy.

Spring beans achieved human consumption grade but with a heavy load of pulses on the market and challenging export conditions were sold at £145/t ex-farm, well below the £180/t in the budget but helped by a yield better than budget.

At £286/ha, the return from the 2015 harvest is similar to that from 2013 before rent and finance but including basic payment.

This is well down on 2014 and the farm’s actual accounts will show a lower profit because the cost of drainage work will all be charged in the 2015 crop year as a repair.

The year 2016 does not look like a vintage one. “It doesn’t appear that crop yields will bail us out from current low prices,” says Mr Wraith.

Based on committed sales, average yields and the price outlook, the farm budget shows potentially the lowest margin for the past four years, at £54.19/ha before rent, finance and basic payment.

Budgets have been adjusted down to reflect market changes since the previous report, reducing the gross margins on winter wheat and oilseed rape by 6%.

“We are sticking with a five-year average yield in the budget. Given the wet autumn/winter and recent cold snap, crops generally don’t give the impression of having the yield potential of 2016.

“The November sales represent about 10% of the budgeted yield and have been made for cashflow reasons.” 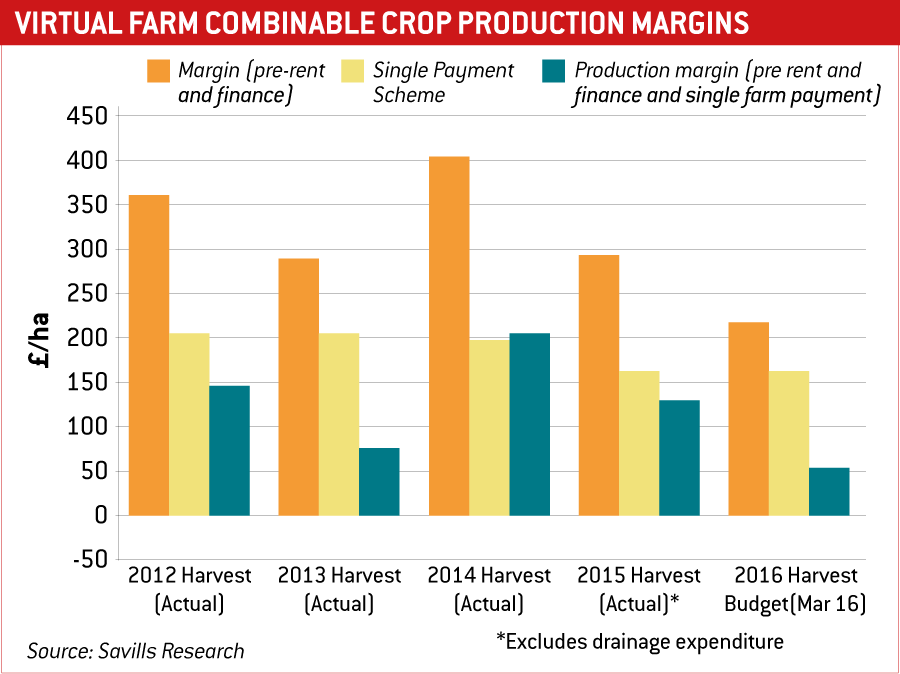 No 2016 oilseed rape has been committed so far.

Meeting the seed specification for the farm’s winter oat contract with limited chemical options is a challenge, as in 2015.

Beans will be the lowest gross margin crop for 2016 harvest but are important for greening, also providing a good spring-sown break, allowing grass weeds to be challenged.

The partnership is also looking at how cover crops perform on other farms, to assess their potential to help blackgrass management and for the contribution they might make to soil condition.

UK manufactured ammonium nitrate for the 2016 harvest has been bought at £225/t early in the campaign.

“This gives us a price lower than in recent years.

“However, lower prices have been available at £215/t for the same product since we made our commitment.

“Across all crops the 2016 agchem spend is being looked at carefully.

“We don’t envisage making substantial savings as herbicide plans have remained robust and the aim continues to be to optimise yield.

“Some price reductions in spring agchems may help modestly – there’s no evidence of this yet but given the reductions in oil and other commodity prices, there should be some scope.”

The farm’s Entry Level Stewardship (ELS) scheme will expire this year and the partnership is assessing the new Countryside Stewardship Scheme (CSS).

The Virtual Farm will apply for a mid-tier CSS agreement, focusing on how the natural features of the holding can meet priorities for the area. The aim is to retain established features from ELS that meet LERAPS and CFE.

The CSS delivers a payment from the options on the land. It is more targeted and requires a higher level of management and input than ELS.

“The Virtual Farm will be typical of other holdings where a suitable scheme can be pulled together by using areas which are less productive and not attractive to crop conventionally,” says Mr Wraith.

“The additional management and input carries a cost. However, it is expected that a successful CSS agreement could be constructed to deliver a payment of £18,000 a year.”

The partnership aims to optimise returns from investment and to continue to generate returns to fund reinvestment.

All businesses should from time to time assess whether they are structured correctly. The Virtual Farm is a family business partnership in which the partners work on the farm.

“With the background of lower margins, we have been considering whether farming in hand is still the right way to run the business,” says Mr Wraith.

“This type of review should be done when major capital expenditure is needed on machinery or other infrastructure, to consider the best use of capital.

“It also needs to take into account all the other factors which have a bearing on the farming business, for example the family situation and long-term aims.

“Any significant change to structure on an in-hand unit needs to be considered carefully including any tax impact.”

Three key cost areas were the focus of the review:

Rented land – about a quarter of the cropped acreage is rented on a 15-year FBT at £457/ha. This represents 15% of total output over the holding after deducting basic payment from the rent.

We aim to understand the real contribution made to profit by the short-term rented land during this period of low prices.

Clearly if rent is more than 30% of output there is little prospect of adding to business profit at this level.

Power and machinery – the business has about £475,000 invested in machinery, including three tractors, combine, sprayer, drill and cultivation equipment.

Two obvious alternatives have been reviewed – putting the land onto a contracting farming agreement (CFA) and simply letting the land.

The owned land is 75% of the farmed area – if let, this would potentially provide a secure income.

However, it would mean booking contractors to work the remaining 25% of the land, which is rented in. Alternatively, an exit strategy could be agreed with the landlord.

The benefit of renting out is that it would allow the machinery to be sold and the proceeds to be invested elsewhere.

The potential downsides of letting:

The potential rent for a five-year FBT would show a slightly better return than budget but given the significance of such a decision, the conclusion was current margins could be sustained for a period, accepting the volatile market.

Recent risk management strategies have helped mitigate the effects of this volatility and will be continued, alongside regular reviews of machinery policy. Repair, depreciation and running costs are recorded and compared by benchmarking.

Like letting, this option would release capital and partners to pursue other interests.

A carefully constructed agreement could offer greater flexibility on how the land is farmed – for example with the inclusion of fallow on a managed basis, as all costs become variable.

The partnership has labour, power and depreciation costs of £363.50/ha.

Any surplus after these charges and sale of the crops would be shared between the partnership and the contractor at an agreed rate.

This option would provide a cash injection from machinery sales but was not considered viable as the Virtual Farm is a top 25% producer and the CFA would not have the potential to make a big improvement – the current machinery operating costs are not significantly higher than the contractor’s likely charge.