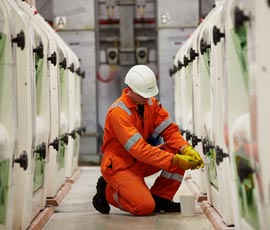 The £350m Vivergo bioethanol plant in Hull was officially opened today by secretary of state for business, innovation and skills, Vince Cable.

The new plant is a joint venture between AB Sugar, BP and DuPont, and is the UK’s biggest bioethanol producer. At full capacity it will use 1.1m tonnes of feed wheat a year to produce 420m litres of bioethanol and 500,000t of animal feed co-product.

Frontier Agriculture is the sole supplier of wheat to the plant through its Humber Gold Club, which offers members contract benefits on moisture, payment terms and block loading to ease ex-farm logistics.

Commissioning at the Vivergo plant has been going on for several months and production is being ramped up, said a spokeswoman. At full stretch the plant will meet a third of the UK’s current bioethanol demand and will be the largest single-source supplier of animal feed.

“We are proud to be the first major renewables investment to become operational in the Humber region,” said Vivergo managing director David Richards.

“Our location right on the Humber is ideal; we’re at the heart of the UK’s wheat belt, which offers some of the best yields in the world, and our channels for distributing the bioethanol either by ship or by road to depots where it is blended with petrol, are second to none,” he added.

The Vivergo plant is a brownfield redevelopment project built on a 25-acre site within the Saltend Chemicals Park near Hull.

It employs about 80 full-time highly skilled people and is estimated to support more than 1,000 additional jobs through its supply chain. The plant has had a chequered history, having originally been scheduled to open in good time for the 2011 harvest. Issues with its main contractor were a major cause of delays early in 2011.

The NFU has welcomed the plant’s opening as it provides another market for UK wheat and feed for livestock prodcuers after a difficult 12 months, which included the mothballing of Teesside ethanol producer Ensus.

“Multiple markets for our produce allows individual farmers the certainty we need to do what we do best and produce to satisfy market demand for food, feed and fuel,” said NFU combinable crops board member Brett Askew.

“We now need policymakers to take a really close look at the enormous benefits collaboration between the agricultural industry and biofuels sector can deliver and provide the consistency in policymaking that will allow us to not only sustainably feed the country but also contribute towards a changing energy sector.”