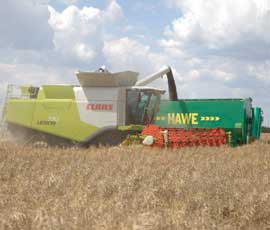 Volatility is here to stay and all farm businesses need to be in a position to deal with it, HSBC’s head of agriculture, Allan Wilkinson has warned.

Speaking at a recent United Oilseeds meeting, he said increased demand for food from developing economies meant uncertainty in global commodities was a factor all farm businesses needed to prepare for.

“A growing world population of course means we’re going to need more food but the biggest factor in that is one which we can do little to influence – the availability of fresh water,” he said.

“Because weather patterns change and rainfall varies year-on-year, that affects production so that we can’t predict what next year’s crops will yield.

This is more of an issue than ever before because of the globalisation of commodity markets. An individual producer in one country is now directly affected by what happens on the other side of the globe.

Consequently farm businesses need to plan for price volatility and accept it as the norm, argued Mr Wilkinson.

“We’ve seen a huge growth on food spending over the last twenty years but farm incomes have remained pretty much the same so something’s obviously not quite right,” Mr Wilkinson continued.

“Farmers need to collaborate to improve their negotiating position for both buying and selling. If they can do it on the Continent, why can’t we do it here? If we could change just that, I’m convinced we would no longer need subsidies.”

He pointed out that, with the inevitable reduction in subsidy payments, a bigger proportion of revenue will be generated from the sale of produce, further exacerbating the volatility in farm incomes.

On a basic level Mr Wilkinson believes farms need to look at input and output prices over a minimum five-year period, taking the cyclical nature of the business into account and calculating average margins over that period.

“Producing for a commodity market, the only thing you can really control are your costs. Not even the top 20% of the farms I visit fully understand their costs,” he said.

“Concentrate on leaving a decent margin between the average total costs for the last five years and the income generated in the worst years.

“That way you know you’ll be clearing a profit even when things are bad – which they inevitably will be some years.

“Volatility presents an opportunity. It focuses the mind on sharpening the pencil. Allocate your resources correctly to make money in the bad times and you’ll be flying when things come good.”

• Make the most of farming partnership agreements