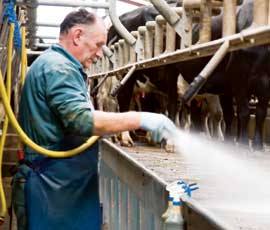 The Agricultural Wages Board for England and Wales will be abolished from October 2013, farming minister David Heath has confirmed.

It follows a four-week consultation period by the government. Plans to abolish the AWB have now been added to a regulatory reform Bill that is currently going through Parliament.

In a letter to union Unite, the minister acknowledged there were strong feelings on either side of the debate, but said abolishing the agricultural minimum wage was “in the best interests of all those within the industry”.

The minister said the AWB, 15 Agricultural Wages Committees and 16 Agricultural Dwelling House Advisory Committees in England would be dissolved as they were “virtually redundant”.

“The abolition of the AWB will mean there is a single employment regime across all sectors of the economy, which will improve transparency for both employers and workers,” the letter said.

“It will enable farm businesses to modernise, become more flexible and compete for labour on an equal footing with other local employers. This will encourage investment in the industry and increase job opportunities, which will help secure the long-term prosperity of the sector.”

Abolishing the AWB has been supported by the NFU, but the proposals previously attracted criticism from the Welsh government, Unite, the Farmers’ Union of Wales and shadow DEFRA secretary Mary Creagh.

NFU deputy president Meurig Raymond said: “We are delighted with the decision to abolish the outdated AWB, and would like to praise the Minister for acting decisively on a consultation that generated passionate responses from all sides of the argument.

“The AWB, while appropriate in the era it was established, has now been superseded by modern-day developments such as the national minimum wage, leaving agriculture totally out of step with the rest of the UK workforce. This makes the decision to abolish it right and proper, and will bring agriculture alongside other modern-day industries.”

But condemning the decision, Unite general secretary Len McCluskey said: “If the case for scrapping the board, which has served generations of rural workers and their communities, is so compelling, then the government should publish the evidence.

“Their reluctance to do so suggests this is another shameful assault on workers for which there is no evidence base.

“This is just one more disgraceful act by a government that has no economic plan for our nation other than to strip back workers’ rights.  This will ill serve our rural communities, driving already low wages down further still for vulnerable rural workers and swelling even more the profits of the big supermarkets.”

The changes are subject to parliamentary approval, but the government intends to introduce the national minimum wage across the agriculture industry from 1 October 2013.

Northern Ireland and Scotland will be keeping their AWBs.