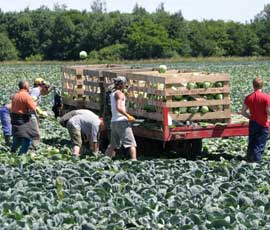 An emergency bill has been introduced in Wales to safeguard farm workers’ pay and conditions following the abolition of the Agricultural Wages Board (AWB).

The Welsh Assembly Government announced details of the bill on Tuesday (25 June) – the same day that the AWB was formally abolished in England and Wales.

“I was very disappointed by the UK government’s decision to abolish the Agricultural Wages Board and was deeply worried that this move could have serious implications for agriculture and rural development in Wales,” said Mr Davies.

“If we take no action this move could detrimentally affect up to 13,000 agricultural workers in Wales, many of whom are low paid.

“I have therefore been actively exploring options for retaining the function of the AWB here in Wales and after careful consideration I have decided to bring forward an Assembly Bill to preserve the effect of the Agricultural Wages Order in Wales after October 2013.”

The Welsh government opposed the abolition of the AWB, but the UK government said it was not a devolved matter because it dealt with employment law rather than agriculture.

DEFRA said abolishing the board would bring agriculture in line with other industries and would not result in lower wages as workers’ rights were already covered with the existence of the national minimal wage and working time regulations, which apply to all employment.

The Assembly will hold two debates on the emergency bill during plenary sessions on 9 and 16 July. A vote is scheduled for 17 July which could see the bill passed into law.

Unite warned that the formal abolition of the board on Tuesday (25 June) could allow unscrupulous employers in the farming industry to take advantage of the situation.

The union urged farm workers to check they were not being short-changed by employers looking to dodge paying AWB rates, which are still legally binding until 1 October this year.

From 1 October, AWB rates will be replaced by the national minimum wage, which Unite warns could lead to pay cuts for thousands of agricultural workers and deepen rural poverty.

Diana Holland, Unite assistant general secretary for food and agriculture, said: “This is a dark day for rural workers who have been hung out to dry by a coalition government intent on taking rural communities back to the Victoria era.

“Where Unite members suspect their employer is trying to exploit the confusion around the abolition of the wages board, they need to contact their local union office immediately.”

Unite will be setting up a “wages watch” unit to clamp down on rogue employers looking to exploit the abolition of the wages board and combat cuts in pay and conditions after 1 October.

The wages board had set minimum wage levels for thousand of farmers in England and Wales for more than 60 years.