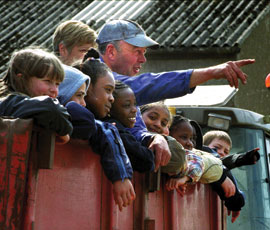 It’s 7am and there’s a line of yellow tabard-wearing 10 and 11-year-olds shuffling along a winding lane in the heart of the Devon countryside.

Some, you might think, are sleep walking, others are just hiding inside their hoodies trying to delay the move into full consciousness. What, you ask, are 10-year-olds doing up at this time in the morning?

The reluctant early birds are from Lark Hall Primary School in London and are one of 31 schools that take part in the Farms for City Children project every year at Nethercott House, near Winkleigh, Devon.

What differentiates this project is that children are placed on commercial livestock farms – hence the crack of dawn start.

It would be fair to say enthusiasm was not oozing from every pore as one group dragged their wellies down the road to the first job of the day. But the sight of eight newborn lambs bleating for their milk was as good an alarm clock as any.

The children have a number of tasks every day that they rotate during the week on farm. This could be anything from hand scraping the collecting yard to feeding the chickens and moving electric fences.

The Farms for City Children project was the brainchild of world famous War Horse author, Michael Morpurgo and his wife, Clare, who set up the charity in 1976.

The charity owns Nethercott House, which acts as the residential centre during the stay, as well as the nearby dairy. Two neighbouring farmers, brothers Dave and Graham Ward, are then equally involved with the organisation. They each run their two separate farms, Bridgetown and Parsonage, as commercial units, but agree to take children from the project 32 weeks of the year, six days a week.

Nethercott is one of three farms across the country offering farm experiences for city children, with the other two in Pembrokeshire and Gloucestershire. Overall, 90 schools a year are involved.

“Occasionally we get letters from parents thanking us and saying how children have changed as a result. Often it’s the development of domestic skills such as sweeping the floor or keeping their room tidy.”
Catherine Knight

The success of the project has a lot to do with the time and effort put in by the farmers involved. Having such close contact with real commercial farmers gives children a real insight into rural life. And notably, nothing they do is too far removed from what the farm would do on a day-to-day basis.

Dave Ward, who runs 150 mostly Suffolk ewes and 50 Limousin sucklers at Bridgetown, explains: “We don’t set up anything special for the kids – they do as we do to see the reality of farming.”

Dave’s parents were initially approached by the Morpurgos in the 1970s to get involved in the project since when the family never looked back. “Farming is my life and I really enjoy educating children about farm and country,” says Dave.

As the troop of sleepy 10-year-olds arrive at Dave’s farm, there is a sudden burst of energy and offers to help feed the foster lambs in the shed. Dave’s son Simon is quick to chat to them about what needs to be done and they then head over to the cow shed to help bed and feed up.

“It’s important for children to know their food doesn’t come from the supermarket. Some beef animals here are ready for market in 3-4 weeks time and they need to be aware of this and not be ignorant of where their food comes from,” says Dave.

Graham Ward, who runs the neighbouring 150-cow dairy herd, along with a small flock of pedigree Charollais, agrees. “Children tend to know certain parts of the jigsaw, but being on farm links it all up. Farming is our business, but it’s nice to see another side of life and it’s very rewarding.”


Catherine Knight, school manager at Nethercott, says the day-to-day activities allow children to understand the links between how food is produced and what arrives on their plate.

“They can understand the continuity of the dung heap and how that produces compost which goes on the garden to help produce vegetables, and they can link up the fact bacon comes from the pigs.” The charity uses pork from their own pigs and eggs from the farm’s chickens to feed to the children.

Dave comments that during the 34 years the farm has been involved in the project, children’s basic understanding of where food comes from has not got any better. However, as the week progresses, there is a marked change in understanding. As Simon observes: “A lot of the kids have never seen a cow or a sheep before and look at you with blank expressions when you ask where milk and meat comes from. However, by the end of the week they’re asking in-depth questions about colostrum.

“And often a lot of children that don’t do so well in the classroom thrive here.”

A greater understanding of the countryside is a big benefit of the project, as are the basic skills learnt from working as part of a team. Catherine says it’s the life skills they gain that really count. “Living and working together really helps them develop relationships within groups and also with other adults. Often new friendships are formed that they take back to the classroom.” And such skills are perhaps even more crucial to some of the autistic children that visit the project. 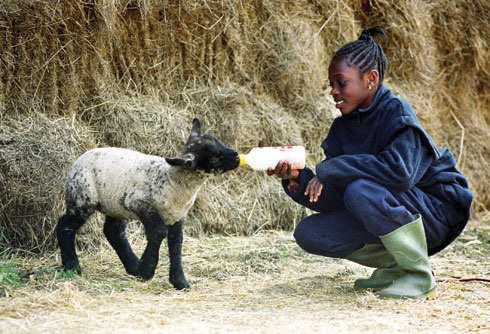 As part of the visit, the children also get to cook and hear talks from farmers about traditional farming methods. They are also involved in “Forest School”, a programme where they get to make camp fires, saw wood and make hurdles out of willow.

The charity subsidises the children’s visit – many of whom are from deprived inner city areas. This year the organisation needed to raise £340,000 to subsidise the kids, which enables them to attend at a cost of £180 for the week, rather than the actual cost of £280 a child. Individual schools may choose to pay for the trip themselves out of government funding, whereas others may ask parents to pay for all or part of the amount.

This experience changes children’s lives, says Catherine. “Occasionally we get letters from parents thanking us and saying how children have changed as a result. Often it’s the development of domestic skills such as sweeping the floor or keeping their room tidy.”

Miss Bassett, assistant head teacher at Lark Hall Primary School, which has been coming to Nethercott for three years, says the experience promotes hard work and self sufficiency. “Children learn about team work and also learn a lot about themselves and what they are capable of. These are inner city children that come from a deprived part of Lambeth. This gives them an idea of a totally different lifestyle that one day they might choose to return to.”

In most the enthusiasm for the experience is obvious, but even the ones that appear less enthralled tend to voluntarily return year after year. It may take some of them longer than others, but there’s no doubt in years to come, they will look back on their time at Nethercott with fond memories and more importantly, pass on their experiences of farming to their children. 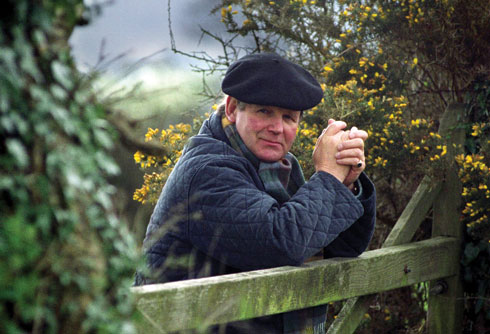 What have you learnt?

Christina, aged 10: “I learnt to stay away from the geese and don’t stand behind the donkey as you might get kicked. I also learnt the different animal names: a heifer is a girl, a calf is a baby cow and a bull is a boy.”

Sian, aged 11: “It’s my first time on a farm. I knew meat came from animals, but we ate some bacon from a pig from here. It’s not fair, all animals live a happy life here and then they have to die. But I like bacon.”

Sam, aged 11: “This is the second year I have come here. Cleaning poo is my favourite as you get messy and you get to work as a team.”