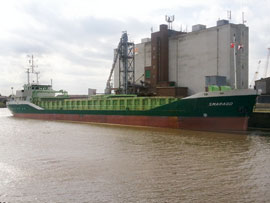 It has been a turbulent week for grain markets as ongoing drought concerns across key growing regions of north-west Europe pushed prices higher.

London November feed wheat futures hit a contract high of almost £200/t late last week and while prices have slipped back since then, markets remain nervous as analysts try to gauge the impact of weather problems on the 2011 crop.

November wheat futures were around £8 off their high at £192/t as Farmers Weekly went to press on Wednesday (25 May), as good crop reports in Australia, a 2-3m tonne increase in India’s crop estimate and prospects of Russia and Ukraine returning to the export market took the edge off prices. The Ukrainian government is understood to have approved a resolution cancelling grain export quotas that could see exports resume this year.

But the ongoing yield uncertainty meant the outlook remained bullish, Gleadell managing director David Sheppard said. “There are still enough bull arguments to say prices have to at least remain supportive, if not return to contract highs at some point.”

Alongside UK yield concerns, the French wheat crop had been particularly badly affected by drought, with one analyst, Agritel, downgrading it from 36m tonnes to 31.7m tonnes. Agritel also reported the first winter barley had been cut unusually early from dry land in the Charentes region with “catastrophic yields”.

German wheat production was also likely to fall, by 7% to 22.3m tonnes, while US spring corn (maize) plantings had been slowed by cold, wet weather and there were concerns about the condition of winter wheat, Mr Sheppard said.

“UK farmers have probably sold 40% of a ‘normal’ crop forward, but with some yield estimates we’ve been hearing, that could now be equivalent to 60-70%. The question will be whether to sell more or wait to see what is harvested.”

Openfield‘s David Doyle said such uncertainty would keep markets in a “state of limbo” until there was a clearer picture of yields. “Trying to analyse the value of wheat is very difficult and we won’t know the true state of crops for another three to four months.”

Harvest performance in Russia and Ukraine was likely to have the biggest influence on prices in the first quarter of the 2011-12 season, he suggested. “The situation there seems to be acceptable, but just as we don’t know the extent of damage to yields here, they don’t really know how crops will perform.”