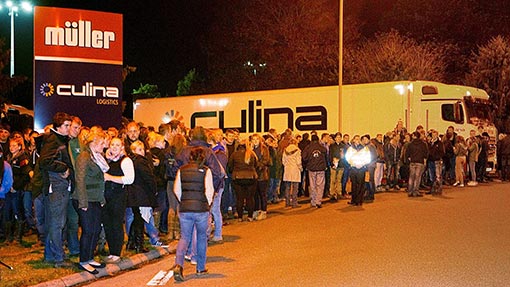 A coach full of Welsh farmers is travelling to Somerset to join West Country dairy farmers for a second night of protests against falling milk prices.

Farmers For Action, which orchestrated a protest outside the Muller Wiseman processing plant on Monday, 6 October (pictured), said a coach full of Welsh farmers was heading to Somerset to take part in a planned demonstration in Bridgwater.

The farm lobby group tweeted: “Coach with West Wales guys and gals travelling to Somerset this evening, hog roast being provided to sustain you all throughout the evening.”

Details of the processor or retailer dairy farmers would target have not been revealed.

However, Muller Wiseman and Morrisons depots are located near the M5 at Bridgwater. Both were targeted in the SOS Dairy campaign in 2012.

FFA chairman David Handley said in a statement: “This campaign is all about telling consumers, the government and all who play a part in our milk supply chain that things are not right.

“All processors and retailers who currently extract money are targets within our campaign to get the message across.

“UK dairy, although not exempt from global issues, should not be sustaining the milk price cuts it currently is.”

Over the past six months, many farmers have seen their farmgate milk prices tumble from 34p/litre to 27p/litre.

The NFU has blamed a slump in global dairy commodities and oversupply of milk for the current milk crisis.

However, FFA insisted UK dairy farmers should not have seen prices fall by about 6p/litre during the past four months because 85% of the milk they produce is used in this country.

Somerset FFA co-ordinator and dairy farmer James Hole, who farms near Wedmore, said his milk price with Arla had dropped for the past four consecutive months from 34p/litre to 28.5p/litre.

“There are an awful lot of farmers out there who want answers as to why they are continually seeing their profits cut when companies are announcing huge profit margins,” said the 27-year-old, who farms 500 cows with 240 British Friesian cross Holsteins in the milking herd.

“I believe there is a bright future in agriculture. But producers and retailers have got to realise that without a sustainable milk price, we cannot continue to make investments in our units and farms at an efficient rate.

“It’s absolutely ridiculous that bottled water is more expensive to buy in the supermarket than milk. How many more nutrients are there in milk [than water] to support a proper diet?”

Mr Hole added: “The last thing we want to do is protest. But if we don’t protest, are we going to have four more months of price cuts? It would just drive a lot of producers out of the industry and discourage new entrants.”

However, opinion remains divided over whether protests are the right course of action to deal with the problem.

Two-thirds of FWi readers agreed that Farmers For Action were right to stage milk protests.

When asked whether dairy farmers were right to launch direct action against processors and retailers over falling milk prices, 66% (235 votes) said Yes and 34% (123 votes) said No in a survey on fwi.co.uk

The survey will remain open until 3pm on Friday (10 October).

* If you are attending the protest in Somerset tonight (Wednesday), email your pictures and send your views to jonathan.riley@rbi.co.uk