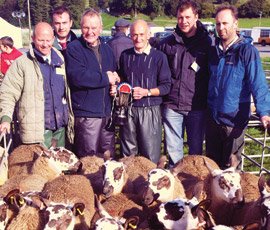 Well attended by buyers from as far afield as Hampshire and Cornwall, the sale was blessed with a level trade from start to finish, said auctioneer Chris Davies of Brightwells. “The 3,200 yearling ewes met with a very buoyant trade, to average £156.37 – up £11 on the year.” A pen of 30 ewes topped at £205 a head.