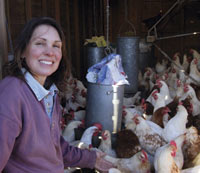 Welsh organic egg producers are being encouraged to start rearing their own pullets before the current derogation on non-organic birds ends.

Tony Little of Organic Centre Wales is compiling information on production techniques and pullet management with the aim of producing a blueprint.

“The certification bodies have made it clear that the derogation will end on 31 December in 2011 and we know that supplies of organic point-of-lay birds will still be very restricted,” said Mr Little. He was speaking at a recent seminar aimed at would-be rearers near Aberystwyth, Dyfed.

“Improving the supply is a massive challenge and we are determined to give all the help we can to all the organic egg producers in Wales.”

These, certification bodies and egg buyers were being surveyed to assess the likely future demand for organic pullets.

Also he was collecting all the practical management information he could from the small number of Welsh units with pullet rearing experience.

“Hopefully we will be able to use farm events, workshops and factsheets to explain the level of capital investment involved and provide advice and training on practical management.

“Already we can tell interested farmers that home rearing does not need to be a very complicated high-tech enterprise. Those who have done say they have no regrets.”

Liz Findlay of Nantclyd Organics, Llanilar near Aberystwyth, is closely involved with the Organic Centre Wales project. She has been in organic farming since 1989 and established her poultry unit a decade ago.

The land used by the birds is part of a rotation that includes growing kale to feed to sheep, mixed cropping with wheat and peas and growing roots, brassicas and strawberries.

Pullet rearing started five years ago and from five or six weeks old, the birds are reared on grass/clover reseeds grown under naked oats.

“Rearing started because of the difficulty of sourcing organic pullets, but I was also influenced by the cost of bought-in birds,” Miss Findlay told the meeting.

“I was also attracted by the idea of being in control of rearing replacements for our 1000 laying birds.”

Even after five years she is still tweaking management. The main problem has been light losses caused by smothering at between seven and nine weeks, possibly attributable to low-flying aircraft or similar loud noises.

Mobile sheds have been used to brood batches of 1000 day-olds, with the Maywick gas brooder staying in for at least eight weeks.

“I use corrugated cardboard surrounds, with extra insulation added into the house, which I remove as the birds come off heat.

“It is easy to use natural daylight when rearing after the beginning of June. Care must be taken when rearing March-born pullets as they can come into lay early as a result of increasing daylight at 15 to 16 weeks.”

Her solution is to restrict the length of the pullets’ day on the range to 12 hours. Perching is introduced at five to six weeks.

Day-olds are vaccinated against Mareks. She also vaccinates for infectious bronchitis and Newcastle disease through the water supplied, with a booster at 16 weeks.

“I buy a starter ration with 25% protein for the first three weeks, and pullet rearer with 20% protein to around 7seven weeks. I estimate 1.5kg of feed a bird to six weeks.

An 18% protein grower ration is then introduced, replaced between 10 and 16 weeks with a home mix. Grit is also provided from three weeks of age.

She is convinced that her home reared pullets are calmer and more prepared to range widely.

Farmers attending the seminar heard that starting with a day old chick costing 80p, it costed £1.50 for feed during the first seven weeks. The feed bill between seven and 16 weeks was £2.00 and vaccinations at 15p/bird.

“Obviously shed depreciation and labour charges are very variable, but I think we can rear an organic pullet for about £5, compared with paying around £7 to buy one.

“Costs can be reduced if a rearer can grow enough birds to benefit from economies of scale. With the end of the derogation looming, I expect many more people to start pullet rearing.”

Another producer about to start rearing a seventh batch of 350 to 500 pullets said a system using small mobile sheds to brood, allowing access to range from five days of age, and not operating a lighting regime, worked well.

A Waitrose supplier said that after 18 months there was nothing negative to say about a system involving brooding pullets in a former dairy cow cubicle shed.