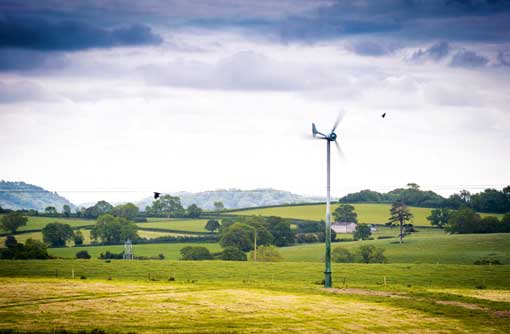 Managing a successful wind turbine project is a process of compromise, flexibility and determination. There is a long and complex list of decisions to be made and it is rare for anyone to get every decision right first time.

You will need to adapt your project to the growing range of constraints including budget and Feed-in Tariffs (FiTs) level, grid capacity, airports and airspace, ecology, landscape and a variety of other planning restrictions. These will be key factors in deciding whether to install one larger, or two smaller, turbines.

When choosing a turbine, it’s important to consider which FiTs bands will suit your business in terms of being most cost-effective and providing the greatest return.

It may be sensible to go for a smaller-rated turbine and make sure you hit the top of the tariff band, rather than stretching to a larger turbine but being at the bottom end of the next tariff band. For example, a 500kW turbine gives a tariff payment of 17.5p/kWh, while a 550kW turbine gives 9.5p/kWh.

Often, the decision will be made based on your own requirements – if you use a lot of electricity, you might go for a higher output at a lower tariff level to save money on buying in electricity. If you are looking to export all the electricity, the tariff band becomes the central concern.

The decision on size of turbine may be taken out of your hands if you have limited connection capacity.

It is important to request a grid connection quote in the early stages of the project so that you know how much it will cost, when it might take place and whether there are capacity limitations.

Grid connection costs range from a few thousand up to £1m plus in remote or saturated areas so it can be a deal-breaker. Be wary of depending on a budget quote – only formal quotes are definitive.

The local council will have planning policies designed to accommodate the government’s carbon reduction targets, while at the same time trying to protect the local area against insensitive development.

So choosing a site for the turbines will be a balance between putting them in a part of the farm where they are least likely to be seen, and making sure that there is clear air space to reduce the effects of wind turbulence caused by trees, hills or buildings.

Turbines are an emotive topic and will often cause opposition, so siting carefully can help to mitigate this.

Where more than one turbine is proposed, visual impact is reduced by the turbines being the same height. It may be the case that two shorter turbines will sit below the skyline on a site where a taller single turbine of equal output would cause greater visual impact and be refused planning permission.

Most turbine manufacturers produce a range of tower heights and vary the blade length to get different outputs and to suit a variety of sites.

In very windy places, a turbine should have shorter blades to protect it from damage and, depending on how exposed the location is, a lower tower height can be more suitable. If there are lots of obstructions such as trees nearby a higher tower could be preferable. In sites of lower wind, the blades will need to be longer to get the best output and the hub higher in order to get the best wind speed.

Wind turbines can affect civil and military radar; objections to planning applications from the Civil Aviation Authority, which monitors air traffic “in flight”, from airports and from the Ministry of Defence, are causing huge issues for potential wind turbine installers at the moment.

Aviation radar is a 2D technology so only shows the moving tips of a turbine as flickering dots on the radar screen. As they are moving, these dots can be mistaken for aircraft by air-traffic controllers.

A certain amount of this “clutter” on screen is acceptable to radar operators but it is now approaching saturation point in many parts of the country and aviation authorities are objecting to applications in increasing numbers.

One option is to select two smaller turbines that sit below the radar’s line of sight. By doing this, you may be able to get the same output as from a taller turbine, which would inevitably get a “radar objection”.

Radar operators and technology providers are exploring several options to reduce this problem, including “blanking” mitigation and innovative 3D technology that reveals images rather than just dots on radar screen.

However, this does come at a price, which could be a one-off payment or even an annual fee. If that can be absorbed into the project costs, it may mean that one significant obstacle to development has been removed.