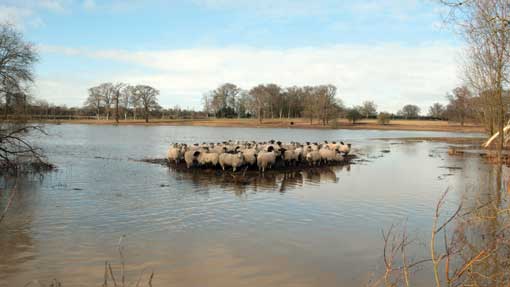 Is your farm business climate resilient? Can it cope with whatever the weather throws at it, while still turning a profit?

The Cotswolds Conservation Board has asked more than 200 farmers, landowners, foresters and food producers these questions over the past two years.

With the Intergovernmental Panel on Climate Change (IPCC) reporting last month that climate change is already impacting all continents, the urgency to build robust businesses is greater than ever.

Farmers who have faced severe weather challenges are more acutely aware of the need to make their businesses resilient, but it is often less of a priority for others, says Mr Lloyd.

“Farmers are the best people to know and understand their land and what it requires, because they manage it day to day,” he says. But challenges like capital, time, or energy can be limiting, and a lack of succession can block action.

Mr Lloyd has worked intensely with 20 farmers through the Cotswolds’ climate change fund and developed resilience plans for 70 farms and businesses.

However, he says there is a real lack of hands-on business advice on agriculture and climate resilience and until this changes, farmers will have to continue to adapt and innovate themselves.

What is “climate resilience” and why does it matter?

“Climate resilience means being able to withstand what the climate throws at you,” says Dr John Conway, at the Royal Agricultural University.

“The most successful farmers are already climate resilient in that their farming systems are designed with their soil and climate in mind. Serious weather events like the floods of the last couple of years may have caught them out though.

“Resilience means changing operations to be able to cope with either the new climate being predicted – and yes farmers would be right to query exactly what is being predicted – or the increased frequency and severity of extreme events, which is also predicted and is already being seen in reality.

“In other words, a farmer should do a risk assessment of flood, drought and heat wave on his farming system – can he cope with a flood? If not what can he do?” says Dr Conway.

What weather challenges do farm businesses need to prepare for?

Farmers need to prepare for more extreme and unusual weather in the immediate future as it becomes less predictable, says Dr Conway. Longer term, summers are likely to be hotter and drier, with longer hot spells. Winters are predicted to be milder and wetter.

Climate shouldn’t be confused with weather, he warns. While climate is an overall, long-term trend, weather changes day-to-day. So changes predicted relate to what the typical climate will be like in general.

Making changes to a farm can take a long time and investment, so farmers should be considering this now, says Dr Conway. Those first to innovate and adapt will get ahead.

For farmers in the Cotswolds, the main challenge is likely to be water scarcity, says Mr Lloyd. Farms account for about 96% of the Cotswold area and much of the land is stony soil that dries out easily. Many farmers locally have boreholes, but there is a concern that abstraction licences may become more restrictive in future.

Water management and efficiency will therefore be key – our case studies show how two farms are implementing measures to manage their land and water (see panels right and overleaf).

How can farmers make their businesses more resilient?

Each farm is different and will therefore require unique adaptation methods specific to its topography, assets and challenges.

“Building resilience into the soil is vital,” says Dr Conway. This is “not about being organic, it’s about maximising organic matter in soils to counteract drought and wetness.”

It is important to reduce cultivation as far as possible with minimum tillage or direct drilling where possible, to conserve organic matter and permit the recovery of soil organisms. “Earthworms are going to be vital allies of all farmers in the future!” Minimum or zero tillage will also cut fuel costs and time.

Water, energy costs and vulnerability can be reduced through water harvesting and conservation, and generating renewable energy.

Farmers at risk of flooding, should consider investing in drainage, raising buildings, and changing cropping on land at risk.

Hotter, drier summers will make it more important to catch and store water in the winter, through rain harvesting from roofs and reservoirs. It will also be important to look at current farming operations and consider how to be more economical with water.

“Think seriously about changes in rainfall during cultivation or harvest and what kind of lower ground pressure technology is best on tractors,” says Dr Conway. “Guys on heavy clay should probably consider tracked vehicles to avoid compaction in wetter conditions for example.”

Dr Conway warns that farmers also need to be alert to new pests and diseases that appear in both crops and livestock.

Choosing the correct variety of existing crops to make the most of soil, location and current climate, will be vital says Dr Conway.

New varieties will appear as plant breeders include attributes like drought resistance into their breeding lines – these will present new opportunities.

“Really innovative farmers will be experimenting with new crops altogether. We know vineyards are creeping ever northward, olives are now grown in some places and sunflowers and grain maize are already feasible but not taken up.”

Climate risks
Too much or too little rain, leading to flooding, reduced yields and crop damage, and potentially high input energy/fuel and water costs.

Attention to soil and water management and the latest technologies are key to reducing costs and increasing yields and resilience at Overbury Farm, says its manager Jake Freestone.

Over the last five years, the tenanted 1,565ha mixed farm producing combinable crops and sheep on the Overbury Estate, has experienced two very wet years, two dry years and one “average” year, as well as an annual rainfall increase of 30ml in the past 20 years.

“Whether you believe climate change is causing the changes doesn’t matter, the weather is changing – we’re getting more intense rainfall and our soil structure at the moment is not able to cope with this,” says Mr Freestone.

There is a risk in changing things, he says, but a bigger risk exists from doing nothing and there are business benefits to be had.

“For us, [after making the changes] our yield potential will increase and our costs of production will go down,” says Mr Freestone.

All of the farm’s spring cropping areas have been planted with cover crops, providing a mix of plant heights and root types, including mustard, fodder raddish, phacelia, oats, peas and turnips. This protects the soil surface, locks up nitrogen, removes soil compaction, provides winter forage for the farm’s 1,100 sheep and allows direct drilling.

Having a longer, more diverse rotation with cover crops provides food for a wider variety of soil bacteria, which help keep the soil healthier by breaking down and recycling nutrients quicker, explains Mr Freestone. This reduces the threat of pests like slugs which like residues.

Overbury Farm spends £60-80ha on cover crop seeds and establishment costs. “It’s quite a cost but the long term benefit is sort of unquantifiable as it will increase yield,” says Mr Freestone.

He calculates that a 1% increase in organic matter results in soil being able to store 250 cubic m of water/ha. This means that if 2.5cm of rain was stored in the soil, an extra 1t/ha of wheat could potentially be produced in a dry year.

With the farm’s latest piece of kit- a “biodrill”, which allows the whole crop to be established in one pass, Mr Freestone hopes to reduce drilling costs.

The Swedish-made Vaderstad biodrill cost £10,500 – with 50% of the funding coming from the Cotswolds climate change fund. It sits on top of the farm’s existing cultivator and blows seeds on to the earth ahead of the press wheels. This will allow seed beds to be created and crops planted all in one go, will save time and fuel and allow Mr Freestone time to expand the farm’s contract work.

The cover cropping and biodrill make the farm less vulnerable to fluctuating fuel and fertiliser costs and the soil more nutrient-rich and better able to cope with wet or drought, says Mr Freestone.

The farm also harvests rainwater off the sheep buildings and stores it in two 10,000 litre tanks. Reed beds take the nitrates and phosphates out of water run-off and irrigation ponds have been dug.

A small amount of electrical energy is generated by a 10Kw solar array, and the farm has its own weather station, costing £4,000-5,000 which provides rainfall, temperature, wind speed, soil temperature and even “leaf wetness” data. This enables the comparison of data year-on-year and forward planning.

Looking ahead Mr Freestone plans to do a whole crop rotation gross margin calculation to monitor the profitability of his cover crop and crop rotation system.

If capital investment in particular is an issue for others looking to make their farm resilient, Mr Freestone advises water harvesting as an easy, cheap and money saving option.

However, he believes soil management is key. “If you don’t start improving soil health until you’re forced to, you may find yourself 20 years behind – it will probably take five to 10 years to get the soil to a good level,” he says.

Free-range egg producer Darren Baylis learned the hard way about the need to ask “what if”, when planning for unpredictable weather.

In autumn 2012 his 2,300 laying hen business lost between £15,000 and £20,000 after what Mr Baylis described as an “unusual amount of rain” washed e-coli onto his land near a 1,000-bird shed. Although the building was near the top of a slope, the arable land above it and underground springs were overwhelmed by the rain.

As a result, he invested in flood defences, land drainage and e-coli vaccinations for all his hens to make his business more resilient.

“If there is the potential there for a climate-related problem, then [farmers] should take action,” says Mr Baylis, for whom the outbreak was a big drain emotionally as well as financially.

E-coli infections developed into peritonitus, and although this didn’t affect the safety of the eggs says Mr Baylis, it left the chickens stressed and unable to lay.

With the help of James Lloyd and £3,800 from the Cotswolds climate change fund, Mr Baylis invested in making his farm more resilient to heavy rain. He dug ditches and drained the land, planted trees at the top of the hill to reduce water runoff, built a concrete bank and a drain, and a silt trap to channel water run-off.

A small reservoir at the bottom on the hill now collects the drained water and provides a habitat for frogs and other wildlife. The cost of improvements overall, including the grant, totalled about £6,000. The whole field is now drier and Mr Baylis’ father is able to use it for his sheep.

“Having made the changes, the financial benefits might be the main gain, but the emotional side too is really important,” says Mr Baylis. “The hens’ welfare is improved and personally there’s not so much stress – it’s definitely taken the worry away.

“It has also made me think more about where to put a shed and about the direct effect of the weather.”

Climate change predictions of warmer, wetter winters and earlier springs are likely to lead to more pests and diseases. This year flies arrived in March after a mild winter failed to kill them off and Mr Baylis had to treat the sheds for fly eggs two months earlier than usual.

Now that his farm is more resilient, he plans to continue to grow and expand his business.